As the headline suggests, Sony is rolling out a software update for the newly released Xperia Z5 and Xperia Z5 Compact to fix various Stagefright vulnerabilities that existed in the release software. We have to admit to being a little bit puzzled that the phones would be released with vulnerable code, given the patches that existed at the time of the release, but Sony’s onto it fairly quickly.

The update for both phones takes the software version to 32.0.A.6.152, and while it is available for some Australian models (presumably those sold directly via Sony’s kiosks or retail stores), the carrier versions haven’t as yet been approved. Sony’s firmware server shows that version 32.0.A.6.152 is available for download for both the Australian Xperia Z5 (E6653) and Xperia Z5 Compact (E5823), so if you’re concerned enough to want to grab the firmware and flash it yourself, you can.

The results are definitely there; this screenshot is from our Xperia Z5C and it shows that it is – in fact – no longer vulnerable: 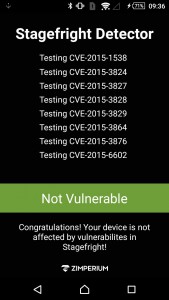 Given it’s a bit of a complicated process, we don’t want to go into great detail and have someone come unstuck, but there are guides you can follow on XDA Developers about how to use XperiaFirm to grab the appropriate firmware, and then to use a tool like FlashTool to apply it to your Xperia Z5 / Compact.

If you’re not that impatient, stand by, because an OTA update to take you to the updated version probably won’t be too far away. Do note that the Australian firmwares are not linked in the source link below; you’ll need to find and flash them yourself.