Optus and Telstra have been testing their Stagefright fixes for the newly launched Samsung Galaxy Note 5, and they’ve begun rolling out the update to users on their network.

The Optus rollout is listed as completed on their website and we’ve captured a screenshot of the Over The Air update hitting handsets now. The update, which is about 144.28MB in total, still has the Galaxy Note 5 at Android version 5.1.1 but as well as the Stagefright updates also includes some improvements including Gear VR support as well as improved call stability and overall device performance. 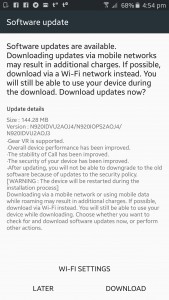 Vodafone too is testing the update, but have found issues with their software and are advising the issues are being investigated.

It is important to note, that Samsung have stated within the update notification that users will not be able to downgrade to older versions of software simply because of updates to the security policy.

If you haven’t already received the notification for this update, just simply head to Settings > About Device > Software Update and hit the update now option.

what about other Optus phones as I have not heard of an update in relation to Stage fright. I have an S5

I think the last blog post from them mentioned early Nov for S5. Hmmm!