Huawei are doing some great things recently; they’ve got some strong carrier partnerships in place, they have branded stalls in major shopping centres to increase brand awareness and they’ve been doing great things in the Android Space including the release of some outstanding devices such as the Huawei Watch, the P8 and more recently the Nexus 6P. Huawei has had some great phones and now they’re venturing with intent into the tablet market as well.

The Media Pad M2 is a big step in establishing Huawei in the tablet market; it has a really nice look to it and a solid (without moving into clunky) feel to it. In fact, I’d go as far as saying that the Media Pad M2 has a premium feel to it but without the premium price (Ed: This is actually Huawei’s catchphrase for the MediaPad M2!). This tablet was launched on the quiet in a carrier deal with Vodafone which (on the lower end of cost) will only set you back $34 per month and includes 2.5GB of date which frankly (given $20 of that is for data) is a steal for a decent tablet let alone a good one.

For those not looking for a carrier deal, the Media Pad M2 is also available from this week at JB Hi-Fi, Harvey Norman, Dick Smith and other stores from $499.

A quick look at the build

Physically the Media Pad M2 has a really solid feel to it, even with some very deliberate twisting force on the device there was next to no noticeable flex in the chassis at all. The power and volume rockers sit in a natural and expected point on the upper right side of the tablet when you’re holding it in portrait mode, making them on top of the device when you rotate it to landscape mode for viewing images, video or playing games. On the lower right you’ll find a slot cover much like those on the Xperia range of devices which reveals MicroSD and SIM slots for those of us who like connectivity and storage.

Perhaps an interesting point is the fact that Huawei have chosen to put both the headphone jack and the charging port on top of the device (in Portrait mode). The headphone jack is a point of debate with a number of people I know, personally I like it on top of a tablet, on the bottom of a phone but these days with Bluetooth headsets being so good its not as much of a discussion point as it once was.

The screen is an 8 inch IPS running 1200 x 1920 resolution at 283 ppi which isn’t the best screen you’re going to see on paper, but when you see how well calibrated this is it won’t matter. The screen displays well and lets be realistic here, you’re not buying an 8” tablet to watch 4K videos. It needs to offer decent playback and run time, with the 4800 mAh battery onboard you’ll some good run time as well. Compared to my Nexus 9 which over time has become something of a disappointment, I’m getting 3 average days of use before needing to recharge the M2 vs the Nexus 9 as a daily need.

The initial feeling you get from the Media Pad M2 is that it’s trying to be something it’s not, you’ll find pretty quickly though that it does in fact stand up to what it appears to be. The system is really snappy running Android 5.1.1 Lollipop and perhaps surprisingly; 2GB of RAM. Even when I’ve been fast switching between some memory hog apps, I’m yet to really find an easily reproducible trigger to get the tablet to lag in switching or loading a new app.

A very pleasant surprise when I started playing around with the Media Pad M2 was the quality of the camera. Please don’t take this as saying its brilliant and would rival the Galaxy S6s and G4s of the world, but it’s a decent picture if you’re just happy snapping and don’t have time or inclination to grab your phone. But if you’re buying a tablet for the camera a piece of advice; you’re doing it wrong!

Probably the biggest issue I’ve found with performance so far is the speed of charging, its slow… REALLY slow. I know its a big battery but there’s no reason that on a reasonably high amperage charger that charging from 28% to 100% should take 5 and a quarter hours in the current age of quick charging.

EMUI is an interesting take on the Android OS that you’ll either love for the “everything’s on screen” feel or you’ll despise it because it becomes quite complex to change anything. I fall into the latter and (sorry Huawei) it took me less than an hour to drop Action Launcher Pro on the device, all of a sudden this became an extremely likeable tablet and very easy to use. It comes out of the box with the basic Google applications you’d expect on an Android devices and a host of EMUI skinned stock applications some of which are alternatives to Google Applications, some are useful and some are pointless. But if you’re not going to use them, just disable them it’s not difficult. 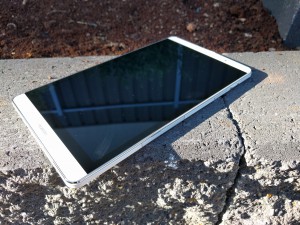 For some basic web use, emails, videos (yes Neflix included) and the odd game I’m yet to find a real hang up for this tablet. Its just handling everything I throw at it with ease. I can happily say that once I switched launcher to something that is more appropriate to my use, this has been a hugely positive experience and warmed me to tablets once again.

Whether or not its compelling enough to go out and buy, we’ll let you know in a couple of weeks when the full review is up.

What do you want to know about the Media Pad M2 in the full review?

How’s the battery life? And is the $499 version in DSE/HN/JB the LTE model?

And if you’re looking at the LTE-enabled version, can it make phone calls as well?