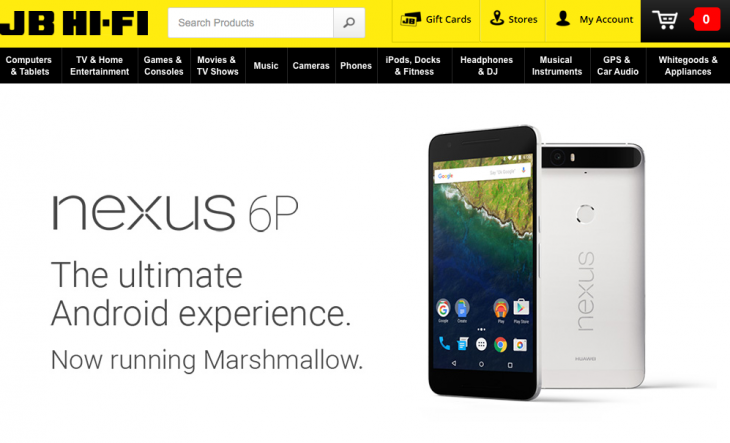 A developing story this evening on the Nexus 6P, which has been having connectivity issues on Telstra’s 4G network, suggests that the Huawei handset has been temporarily removed from sale at JB HiFi while the issue is investigated and resolved.

Users of Australian technology forum Whirlpool noted this evening that the phone had disappeared from the JB HiFi website (we’ve checked; it’s gone) and people making enquiries at JB stores were told that the phone wasn’t available for purchase at the time.

When accessing JB HiFi’s page for the Nexus 6P at present, only a page not found error is returned:

While the move is disappointing for a phone that is otherwise brilliant, it does make some sense; as JB HiFi are Telstra dealers, it seems prudent not to continue selling the phone to customers while the 4G service isn’t reliably working on the handset. JB is an authorised Telstra dealer and does offer Telstra services to outright phone customers, so in circumstances where the phone isn’t working too well on Telstra, it makes sense to halt the sales for a while.

Owing to the late hour, we’ve not had the opportunity to confirm the removal from sale in JB stores, but Whirlpool user Tephra gave this information just after 6pm this evening:

“Was just told my a JB person that JB Head Office has told all stores to cease sales of the 6P.”

We’ve maintained contact with Huawei and Google since the issue came to light, and while official word is fairly minimal at the moment, we know that Google have publicly acknowledged it via their product forums, and Huawei has pointed us to the same public comment, implying they too are aware of the issue.

We’ll stay with it and let you know once we have something more firm from either Google or Huawei, but given the nature of the issue, it’s entirely possible a fix will be available before or at the same time as the media is told about it.

Funny thing, my 6P hasn’t given me 4g connectivity on Virgin – which I should in theory have in my area. I keep meaning to go into their store and speak to them – my S3 didn’t have 4G so I don’t automatically expect it.

I got my 6P from JB but since Virgin is on the Optus network in theory I think I should be getting it unless my prepaid plan somehow doesn’t offer it – and I don’t remember seeing anything about it only offering certain networks.

You have to call virgin and request 4G otherwise they default to giving their users 3G.

A warning sign on it in-store and online would have sufficed considering the other networks work flawlessly. Just a dumb move.

I agree. Not everyone is on Telstra so like he said, a warning sign would be better so people on other networks can still purchase the phone.

I’m using the 128Gb 6p bought from the Google store on Telstra 4G. Haven’t had any issues….

My 6p on Vodafone works very well and I can get nearly 100mb download and 50mb upload speed.

Probably a good thing, nothing gets a business working harder to get something done than missing out on possible revenue!

Interesting move, but fairly reasonable justification.
Might be beneficial for JB, as it will give them a chance to replenish stock.

I mentioned to a google employee this issue while trying to locate a late package today. They knew about the issue and told me they are working on it. I also was contacted by telstra on a returned call who said they are doing the same thing. Hopefully if retailers start refusing to sell the handset they will…I dont know..hurry the hell up