The Google App on all our phones and tablets can be quite the marvel when it comes to answering those strange thoughts that come to us sometimes, but it’s gotten better according to a new blog from Google.

The InsideSearch blog says that the Google app has grown up a lot, beyond simply searching a topic like ‘Barack Obama’ or knowing that when you ask ‘What are the ingredients for a screwdriver?’ Google now knows you mean you want a nice alcoholic bevarage rather than instructions to make a tool. The newer search algorithim is broken down into a variety of components to understand the semantics of each piece as shown in this infographic: 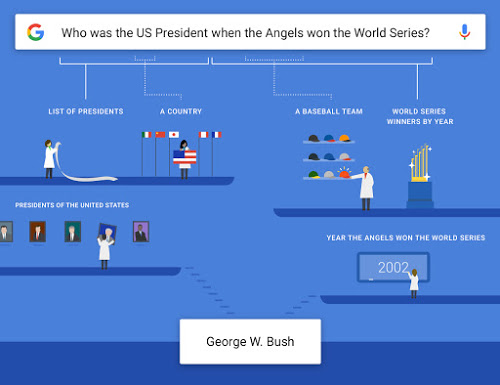 The Google App can now understand superlatives and ordered items, so you can ask questions like ‘What are the largest cities in NSW?‘ and as shown above you can now get information on time based queries such as ‘What songs did Taylor Swift record in 2014?’ and it can do combinations such as ‘Who was the U.S. President when the Angels won the World Series?‘- but it’s not perfect, I mean it still won’t answer ‘who was prime minister when Penrith won the NRL premiership in 2003‘

The breakup of components in the question and the resulting contextual matching that goes on is quite astonishing. For the most part, my (and many of your) searches still most likely consist of very basic word or topic searches, but with this new information, maybe it’s time to maybe start trusting the Google app to know what we’re asking.