Yatango have forged a bit of a name for themselves in the Australian market, initially with their acquisition of Mobicity and then establishing Yatango Mobile. Sadly for the directors, at the start of October, Yatango Mobile went into receivership with an uncertain future following a failed reverse-listing a few months earlier.

A couple of weeks after, at the end of October, other Yatango businesses, including the parent company Yatango Holdings, were placed under voluntary administration. We’ve heard reports of customer orders not being fulfilled for months, and Yatango’s staff being laid off, and complaints not being responded to.

All this left the Yatango customers, especially of mobile business, in limbo — not knowing if they would have continued service, if they would be forced to abandon ship to find another provider or if they would simply be moved onto the MNVO’s parent carrier, Optus. As it turns out, a new MNVO has appeared and they have acquired all of Yatango Mobile’s customers.

Yomojo have burst onto the scene and announced their takeover of the Yatango client base with a tweet:

They have also taken the time to contact all of their newly acquired customers with a basic breakdown of what has occurred and what will occur from here on. The abridged version of the story is this: if you’re a Yatango customer, you shouldn’t see any break in service, change in charges and are required to do nothing. 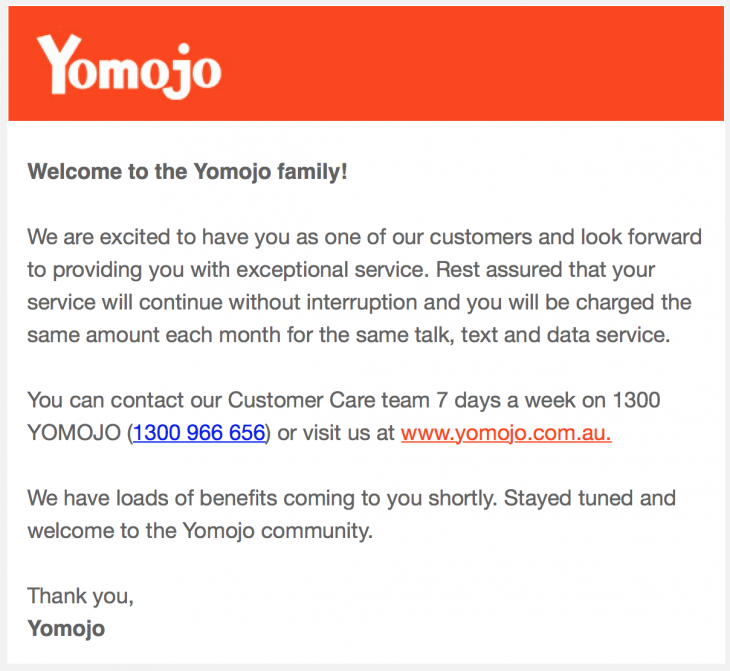 Their website outlines the same detail, where you can review plan pricing (check it out if you’re on the hunt for a bargain, they’re very competitive much like Yatango were) on their parent carrier Optus. The list of benefits are really appealing if you’re not keen on tying yourself into a 24 month contract keeping true to the model that Yatango built ahead of them which clearly appealed to a client base.

While Yatango Mobile clearly didn’t achieve what they wanted to in the MNVO space, it is a wonderful thing to see that there are other members of the business community who believe in the model that was built enough to grab it and take on the big carriers.

We do note, though, that Yomojo’s website does look like it was put together in a hurry, and there’s very little information about who this new company is. If users are unhappy with this acquisition of their business, there’s nothing to stop a port-out and transfer of services to another more well-established company, though of course this choice is up to the customer.

Update: This article was amended to note that other Yatango businesses have been placed into administration, noting the complaints that have been made, and to account for the questions about Yomojo.

Now that we can access our accounts again via the new website (I went through the process to get a new password as I used to log in with my g+ account), I rang them and they answered straight away and said they would port my number if I switched providers. So they seem to have got back on top of some things again.

Tracking through who registered the domain name for Yomojo and incorporated the company running Yomojo and matching some of that information against other publicly available information discloses that the people behind Dodo (before it was sold to M2) are behind Yomojo. Dodo wasn’t known for ‘exceptional customer service’, that’s for sure. Yatango customers, jump ship to one of the carriers or a financially secure MVNO while you still can!

We’ve confirmed through our own investigation that Scott Stavretis is working with Yomojo, confirming that Dodo link.

If this is a shame, and not simply being new and hasn’t got everything working yet, that Optus, who they are meant to be using would do something to have their name removed from the website if not affiliated?

I tried to log into my account since my package rolls over tomo and for the first time there’s an error message and I can’t access the account. Not a great start. Yomojo doesn’t seem to have any existing customers or website functionality for accessing accounts. I didn’t know until now that Yatango had gone into receivership. Now I’m worried.

The Yomojo domain name was only registered a week ago, so the website would have been a real rush job. A lot of the written content has literally been copied and pasted from the Yatango Mobile website.

Yomojo is a brand new business that was created to rebrand Yatango Mobile under a new owner. They make it sound like they are an existing business that acquired Yatango customers, though this is BS.

Also worried. Don’t know if I should port now, and hope my number goes across successfully, or wait, and hope they keep going okay.

I wish they would be open an honest about what is going on. Like sending an email: “Hey, it was a rush job to get all you Yatango customers, there will be some bumps, but please stick with us”. Instead of “look forward to providing you with exceptional service”, as we all know that is never going to happen.

I can’t speak for others, but I know if it was me, I’d be out of there.

Just tried to port to Optus. The Optus dude said he couldn’t contact Yomojo to get some number he needed, so I’m stuck with Yomojo until they answer the phone. Not a good sign. :-/

Also tried to port. Told there was a “delay” and the system is “down” Yeah RIGHT~!

I can’t get to my account for three days!!! I need to recharge my phone and I can’t absolutely use no services. I’m really angry! Terrible service.

Is this a sham, spent 30 mins on chat today. Got nowhere. Cant port, cant recharge, cant do ANYTHING. I think it is a scam to steal our ID details and payment methods, it STINKS>

The ACN that they list is not found in Government database REDFLAG.
No data security policy REDFLAG.

AS an ex Yatango user I am concerned, are my details safe with this unknown entity?

Nice catch. There’s also no business/company (with any ABN/ACN) trading under the Yomojo name.

The Melbourne address appears to be used by a management consultant, so its probably their accountants. Not uncommon. Does suggest that the company doesn’t have much of an Australian presence, though. That ACN does exist, I’m not sure where you actually checked, but ASIC has that ACN recorded against Yomojo Pty Ltd, which was registered on 15 November 2015 as Klass Ventures Pty Ltd before the name was changed to Yomojo. It appears to have to same registered address as noted above, which is occupied by a management consultants firm … so that address is probably their registered address, not… Read more »

As Yomojo was started by a Yatango investor who acquired the mobile customer base, he probably acquired the Yatango Mobile website assets as well. A lot of the info has literally been copied and pasted over.

Can you check to see if this is still the same mob, but just with a different name?
And one problem with Yatango was you could only check your balance online, does this new mob have a number you can call for account balance?

That was my first thought also – perhaps it’s just the same backers as before which would be a concern.

One of Yatango’s former investors, who owns a call centre in the Philippines and provided staff for Yatango Mobile, has gotten their hands on the mobile customer base and started Yomojo. So it is technically a new company being ran by a different person, the investor was however involved with Yatango.

Yomojo is basically owned by this company: