LG’s G4 is surging ahead as the most likely 2015 flagship to receive Marshmallow first, with Telstra letting the update cat out of the bag. According to their OS updates thread, LG’s 2015 flagship G4 will likely see the update to Android 6.0 Marshmallow just after Christmas, with a go-live date set for the 28th of December. 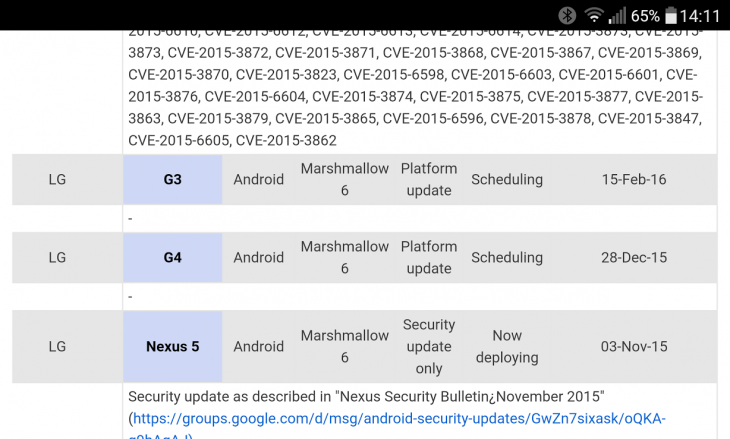 Owners of LG’s G3 haven’t been forgotten about, with last year’s flagship to receive the Android 6.0 update as well, though they’ll have to wait another couple of months until mid February 2016.

We haven’t heard anything official from LG yet, and while they’ve missed the mid-November deadline they had earlier set for themselves, we do know the Marshmallow update can’t be far away, as they’re already releasing it in selected markets in Europe.

As a NEXUS 5 owner in Nz we’ve had Marshmallow 6.0.1 OTA since beginning Dec.
You just have to have the right phone………..

What is absolutely brilliant about this is there are no moaning complaints from Jeni Skunk any more. I love it.!!!!!! I left for a while because of him and when I come back he is gone YAY

He? I think you’ve got that bit wrong.

Jeni’s comments were usually negative, but many of them were accurate.

Some were accurate but the moaning, negativity, school teacher spelling checks and attacking Ausdroid were not appreciated and always negated any relevant comments he brought to the discussion. Anyway enough of that.

According to reports from people that have updated via wire, the update drains battery.
They needed to do a factory reset after the update. Some even just rolled back to Lollipop because of that issue and also because the UI has no changes.

Yeah, I saw a report on another site that it’s been made available to European countries in the last day or so, and that there are issues. LG didn’t update the G3 to include the G4’s interface? That’s disappointing, as they did that for the G2 when they did the Lollipop update. The G4’s interface is much nicer.

Arggg. What am I talking about? This is the G4 – there wouldn’t be many UI changes. Time for a coffee…

Hahahaha, I’m on my second coffee.

Yeah, basically identical UI from lollipop to MM. The only change you’ll notice (If you haven’t noticed already) would be the circular app pics. But i think that’s going to be universal through Marshmellow (Don’t quote me on that point).

I think i’ll be doing a reset regardless of any issues they might have fixed. Mine is a grey import from Kogan’s Ebay group deal. It’s a Singapore edition. The wait for that to get updated will be longer than Telstra’s time frame.

Why will you be waiting longer than Telstra’s time frame? You could always download the update from xda (I’m sure it will appear if it hasn’t already).

How much did you pay for it via the group deal?

$AUD499 Delivered.
The SEA model can’t be unlocked, so it can’t be flashed. I’ve achieved Root access, but that’s all.
There was brief window (an oversight from LG) where you could unlock the bootloader, but they disabled it again for the H815 SEA model.

XDA Can’t do anything for me now. It’s a waiting game.

Oh, I didn’t know that. Thanks for pointing it out, as that would be a deal breaker for me. How can someone tell if it’s the SEA model prior to purchasing? Is the TWN model the same?

As far as i know of, the TWN model is fine. And it’s getting the update rolled out atm. It was just the (un)luck of the draw.
If i knew which model i was getting, i wouldn’t have gotten it.

The G3 update was scheduled to roll out on 16/12. I thought it was too good to be true. The CM nighties will help pass the time.

I’m glad Telstra will not delay it. My G4 has a telstra logo and some bloat but I’m on Vodafone at the moment.

Waiting for the marshmallow update on my d855