The now classic movies based on the series of books by JK Rowling which introduced a whole new generation to reading through the adventures of boy wizard Harry Potter, have arrived on Google Play as a complete collection, just in time for Christmas.

The collection will be priced at $103.95 as a collection (thats $13 per movie for those playing at home), but he movie collection has been discounted as an introductory offer for the launch and also in the lead up to Christmas to a more attractive $76.95 (that’s under $10 per movie) for all eight films.

Though some artistic license was taken with the adaptation from book to screen, the movies series still captured the imaginations of adults and children alike and kickstarted the successful careers for Daniel Radcliffe and Emma Watson (Rupert who?). Not only did we watch the characters grow from children into adolescents and finally adults but the infatuation that the world had with the actors continued off screen, so via media we saw them grow too. 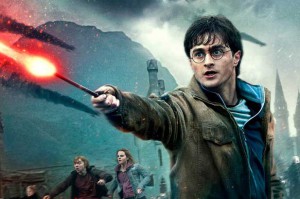 If you’ve got kids that are into Harry Potter, or perhaps you’ve got a secret liking for the movies; head over to Play Movies and grab the Harry Potter Collection for some family viewing this Christmas.

If you’re a Harry Potter fan, which movie is your favourite?

Like Fred, I also got the whole set on Blu Ray for my wife for less than this. A couple of friends did too after I alerted them to the deal.

Hmm, I paid $42 for all the complete blu-ray set, when it came out, with all the extras. Now, many years later, google would like me to pay nearly double that, for less content, …. oh yes, in SD resolution.

I really doubt think they’ve thought this through …..

I have gotten rid of my DVD collection. 4x Floor to ceiling bookshelves filled with movies – 2782 at final count. I have kept a few special editions etc, but for the most part sold them all and re-purchased digital editions from Google Play.

Also – screw getting up to put in a disc.