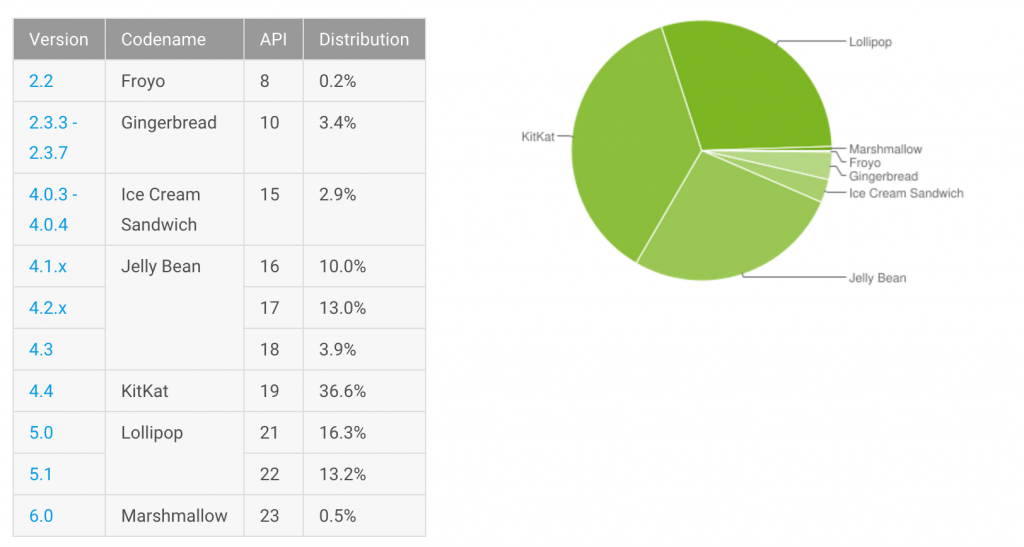 After announcing a new tablet running Android 6.0 this morning, it’s possible we may see wider adoption of Android Marshmallow – but for this month the rise in adoption of Google’s latest version of their mobile OS is looking pretty slow.

Android 6.0, which was only introduced into the Android Distribution statistics last month has seen a small 0.2% rise to sit at just half a percent after a month of availability – still putting it ahead of Froyo which remains at 0.2%. The rest of the eco-system is up and down, with older versions showing slight drops in Gingerbread and Ice Cream Sandwich, Jelly Bean and even KitKat, while Lollipop adoption for both 5.0 and 5.1 versions grew off the back of those declines.

The basis for these reports is of course so developers can target which versions of Android to develop for and the growing trend appears to be towards KitKat and upwards to capture the majority of the Android market. The lesson here is, if your device isn’t up to that level – Christmas is coming, so maybe look into what Santa can leave under the tree for you this year.

Google should be disgusted with these figures. The fact that ~75% of android phones are still on an operating system over 2 years old is disgraceful. I realise this is largely dependent on the manufacturers rolling out timely updates (namely Samsung) but something needs to be done to address this. At present why anyone would buy a phone other than a Nexus is beyond me.

Because not everyone cares what version of OS they run or even know that there is a version.

Yeah my mums Moto G will probably stop working sooner than she needs an OS upgrade.

It is not in the interest of android hardware manufacturers to update their old phones.
They want you to keep buying hardware every year.

It’s nice that KitKat is a reasonable base to work on now. Start a project now based on it, and you’ll be catering to 3/4 of phones by the time you are done.

As always Marshmallow awaits Samsung to release their updates.

Samsung released 6.0 for note 4 in few countries, May be its near