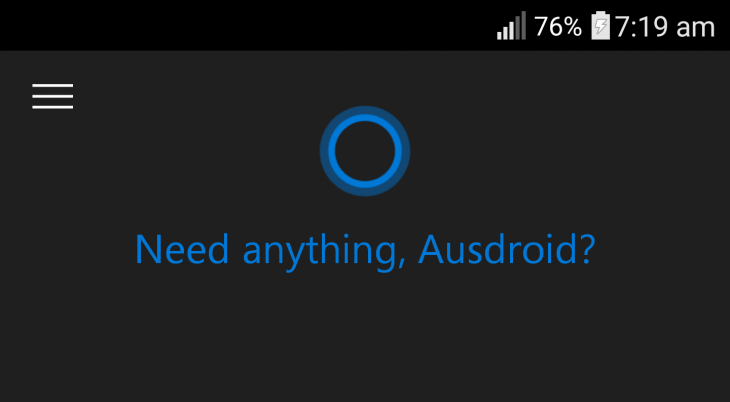 Microsoft’s personal assistant app Cortana has been made available publicly according to a blog post by the company overnight – though as usual, nothing is ever easy and you can only get Cortana if you’re in the US or China, at least for the time being.

Cortana is Microsofts virtual mobile assistant, though it’s tied into the Windows 10 operating system, so you’ll be able to Send Texts from your PC, or track packages or get calendar notifications either at your PC, or on the go – you know, like Google Now does (well, except the SMS bit, but there’s ways around that). The only feature I’ve liked from Cortana after trying it previously is the very well done, decidedly non-robotic conversational voice tone and that you can even ask Cortana to tell you a joke – and she tells some good ones.

In terms of integration, Microsoft continues to plug Windows Phone, saying they can achieve things on their own platform that they just can’t on iOS and Android. They do however push that they have created a specially integrated service for CyanogenOS phones:


we created a more integrated experience to enable Cortana’s voice activation ‘Hey Cortana’ on Cyanogen devices so you can call on her while on any screen or when you’re immersed in an app. The custom integration includes the ability to ask Cortana to toggle network modes, power down your phone, and turn on Quiet Mode amongst other features. With Quiet Mode enabled, all notifications, calls and alarms will be silenced.

Without a real, credible mobile OS, mostly due to the lack of app eco-system on Windows Phone, Microsoft is obviously quite interested in getting you to use their services any way they can and to be honest, they’re doing a bang up job – except the limited China/US only access to Cortana. But that WILL change, so it’s worth investigating whether Cortana can offer you better service – at least if you have Windows 10, if not, probably best to move on.

You can try to download and use Cortana if you want – but Microsoft may be blocking it from their end based on your geo-location, if so try a VPN and let us know how it goes.

The one awesome thing about Cortana on Windows phone is that she will read your sms’s and allow you to reply all via voice. This is still missing on Android. Surly Microsoft can add this feature? Motorola already does it with Moto Assist.