OK, so who stole 2015? We only started this one a few weeks ago didn’t we? Or maybe it has just been another ridiculously busy year with a heap to do, not enough time to do it in and plenty of good times had along the way.

Regardless of why or how the year has disappeared so quickly, it has been really nice to look back over the year; the devices that have been launched, the reviews and some of the more amusing things that have occurred in the tech arena in the last 12 months or so.

There has been some great devices released this year, outstanding features and great hardware. There has also been some absolute dogs that don’t deserve any more mention than I’ve given them already… The release of the Android “M” developer preview was a particular highlight for me personally as I was able to really get stuck into it and find the good, the bad and the ugly through the first and second iterations of the release. As the developer preview progressed, the functionality became better and better improving the user experience.

On reflection, there has been a lot going on that has increased not only the readership and footprint of Ausdroid in Australia, but internationally as well. Ausdroid saw a new side of the press and consumer shows this year with the senior editors attending Google I/O, Mobile World Congress, IFA and a visit to the Oppo factory. Among these trips, there were also others for device launches including the LG G4, Huawei P8 and over to San Francisco for the Nexus Launch in the USA. To get to a point where we are able to attend these shows is a big team effort over time and it is a very exciting time to be a part of the Ausdroid team and I thank each of my colleagues for their input throughout the year.

But enough of that; you’re here to read what I believe are the best bits of the year. Despite some really tight opposition from both the Nexus 6P and the LG G4, I eventually decided that the Samsung Galaxy Note 5 was my phone of the year. Of all the phones I’ve used, abused and reviewed this year, the Galaxy Note 5 is without a doubt the one I missed the most when it was returned. I found that despite the couple of distractions in some software bugs, it was a really user friendly device.

With the paring back (read: advancement) of Touchwiz and how it dictates the workflow on your device, the Note 5 became much more user friendly. This is in stark contrast to the Note 4 when I tried one for a while — with the Note 5, I didn’t feel the absolute need to switch launchers to get rid of that really pushy behaviour and change the look of the software.

While all three of my personal favourites of the year had a winning edge in some way over the other two, the winning feature in the end for the Note 5 over the G4 and Nexus 6P for me was the S Pen. It just added a bit of functionality that I found myself adjusting to and using more and more daily than I envisioned that I would when I first got my hands on the phone.

Smartwatch of the year – Huawei Watch Without a doubt the Huawei Watch, despite having only had a couple of days with it personally there’s so much to like and should I come into a significant sum of money in the near future I’ll likely drop some cash and upgrade my Moto 360 to this.

Calling this the watch of the year is not just because of the splash it made when it landed but the fact that its got so many geeks having excited moments when they look at it. When Dan completed our review he couldn’t really fault the device aside from the lack of GPS and the detraction of the price. It’s a truly gorgeous piece of hardware, the screen is really responsive, the battery goes well and they seem to have learned from the mistakes of many of the first generation of Android Wear devices and when it comes down to it – the Huawei Watch is just a really classy piece of hardware.

Personally I think it would be remiss of me not to give an honourable mention to the LG Watch Urbane — another outstanding bit of kit. Another device that suffers from the “no GPS” issue, but for me that’s ok; I have GPS in my phone, I have GPS in my tablet and I have a GPS on my bike so I think with at least one of those three handy I can figure out where I am. What made this a really strong contender for me was that it was the first real dress style Android Wear device and LG did a great job at making it look great and maintained the full spectrum of functionality that existing users expect from a smartwatch.

The other huge plus for me was the battery that could last several days depending on your usage. For me this one was an absolute no-brainer since I very quickly fell in love with the Media Pad M2 when I got to review it. Its not the most powerful tablet you’ll ever see and it doesn’t have a particularly nice user interface by default, but thanks to Action Launcher 3 I overcame that quickly. Those relatively minor gripes aside, this tablet took me to a place that the original Nexus 7 did; a happy place where a tablet is a compliment to a mobile phone and not an over-sized novelty replacement for it.

It does everything I want and need a tablet to, the screen performs well both on static images and video playback and the battery lasts several days which is more than can be said for my now neglected Nexus 9. Personally I hope the rumours are true and Huawei do make a Nexus tablet next year!

As Huawei have featured as by tablet and smartwatch of the year, and came very close in phone of the year, its pretty clear that they would take my pick as the manufacturer of the year.

Their continued push into the market with clever strategies such as dedicated stalls at major shopping centres, partnerships with carriers and continuing to build their brand in a positive light from a ‘cheap brand’ to now being recognised as a genuine contender in the market is a really happy surprise packet this year for me.

A mobile phone isn’t the whole story, most people have an array of accessories to compliment their mobile devices. In recent times, the focus has been on streaming media through suppliers like Play Music, Spotify and Apple Music. If you’re going to spend the money on a streaming service, it makes sense to spend further money on a good set of headphones or a streaming speaker right? I haven’t even finished the review yet but based on first impressions, I’m more than happy to give this one to the Sonos Play:5. It really is brilliant, at the whopping price of $749 it would want to be too, despite the price it delivers in every way you can imagine. The sound is exquisite, the user interface simple to use and if there’s a streaming media worth using that it doesn’t support… I don’t know what it is! The price is going to deter a lot of users so for those who are not fiscally endowed enough to entertain purchasing such an extravagant piece of hardware; an honourable mention goes to the LG Music Flow family of speakers which are regularly on special at various retailers. 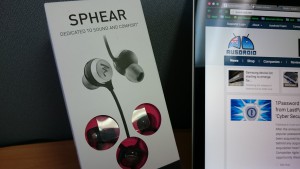 I’ve tried a lot of headphones over the last few years but nothing comes close to the combination of sound, functionality and great battery life as the Klipsch Image One Bluetooth headphones. I actually hated sending them back to the supplier enough to seriously consider purchasing some and its more than likely that when my beloved Sennheiser headphones do eventually give up the ghost, that I’ll be hunting down a pair at one of my local suppliers. One article I had particular fun writing, reflecting on the week prior was the week without Android Wear. While the week wasn’t fun (a combination of a gruelling work week and no Android Wear) it really highlighted to me how reliant I had become on Android Wear in the short time I had it and that we do adjust to having it.

As a result since this article I have actually made a conscious effort to disconnect a bit on weekends, stop reading my email all the time and I significantly reduced the amount of interaction on social media in that time. Its easy to fall into the always connected trap, my take home learning from what started as an experiment was that you need to take time out and disconnect occasionally.

Finally something that is really important to all of us at Ausdroid is your support. This year saw a new record for hits on our site in a single day, its seen really good numbers consistently and it is primarily due to your support and views on our site (and the ads, sorry…) that we’re willing and able to keep doing what we do. Sadly not everything on the Internet is free and running Ausdroid does have costs involved with it which is why we started our Patreon Campaign this year, if you like what we do it would be a big help to us in covering costs like daily running costs, review devices, travel costs associated with press events and prizes if you donate to the campaign. Just $1 per month from every reader would be a huge shot in the arm to Ausdroid and assist us to continue growing and delivering the latest in Android News to your screens.

Which tech toys have tickled your fancy this year? We would love to hear your thoughts too.