Android Wear is overdue for a general update, the last update saw LTE enabled with the launch of the LG Watch Urbane 2 LTE but with the cancellation of that watch a broader update is apparently in the works. The update still seems to be targeting second generation hardware with one reddit user with a Huawei Watch reporting his watch received an update of what appears to be a beta build that enables the speaker on the watch.

While current versions of the Huawei Watch are sitting on version 1.3 (1.3.0.2421912 to be exact), reddit user ThirdTimeCaller has seen his watch updated to 1.4 (build MEB78D) and it brings with it the Audio Feedback in Accessibility options, as well as the option to play music, make and receive calls on his watch with just the speaker for audio and set a ringtone. 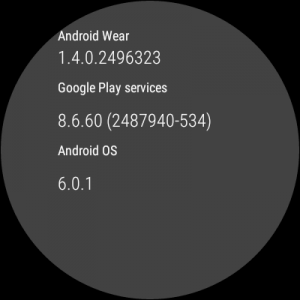 For a quick look at some of the audio features in Android Wear 1.4, he made a quick video:

There’s some bugs, apparently Google Now doesn’t read back results, but that could be a good thing. It’s looking pretty complete though, so perhaps we’ll see something official shortly to kick off the new year with a bang.

I wonder if it will make the vibration stronger or have that setting on the Huawei or if maybe he did that under his developer setting. Mine is very low.

Finally, the ability to hang up phone calls from the watch.

I really hope that you’ll be able to just use the watch as a mic and have audio go to headphones or something, that’d be rad.

+shaboogen
uh? you can do that with pretty much any smart phone out there right now.
unless you were being sarcastic or something.

What are you talking about?

Sorry i meant “any smart watch”

Except that you can’t do it.

I own 3 Android Wear Smartwatches. You can’t hang up an active phone call on any of them currently without either using another app, or setting up a watch notification through Tasker.

So yeah, I have NFI what you’re talking about. I suspect you don’t either, but I’m happy to be wrong if you can demonstrate.