Home Smart Home and Wearables Around the Home ZTE has a 4K AndroidTV box at CES but you’ll probably never... Android TV has gained a number of new partners at CES this year, with new TV’s being released with it built-in, but not everyone is interested in buying a whole new TV, so set top boxes are where it’s at. ZTE has an Android TV box at their booth with support for 4K video, but you’re probably never going to see it in your home.

The box is a fairly non-descript looking unit, and their spec sheet reads like a white-label solution for manufacturers to rebadge rather than a planned product launch. This is CES afterall, so companies are definitely looking to sell hardware solutions to vendors – but from the hardware list, I’d love to see this in my living room.

The spec sheet lists off hardware such as 2GB of DDR4 RAM and 8GB of internal storage, but also lists options for 4GB RAM and 16GB of storage, further backing up the feeling this is a box just waiting to be re-badged.

The ZTE Android TV box – model number: ZXV10 B800S2 (yeah, that rolls off the tongue) – comes with all the connections you could want from a set-top box though including HDMI 2.0 in and out, so HDMI pass through is an option. There’s USB 3.0 and USB 2.0 ports and of course the big draw card for video streamers: an RJ45 jack for wired ethernet. The box also has great wireless support including Wi-Fi 802.11 AC, 2×2 MU-MIMO and Bluetooth 4.1. Software wise the ZTE box supports up to UHD streaming at 60fps with 10-bit colour including support for a variety of codecs such as H264, HEVC/H.265 and VP9 all running on Android TV GMS based on Android 5.1. 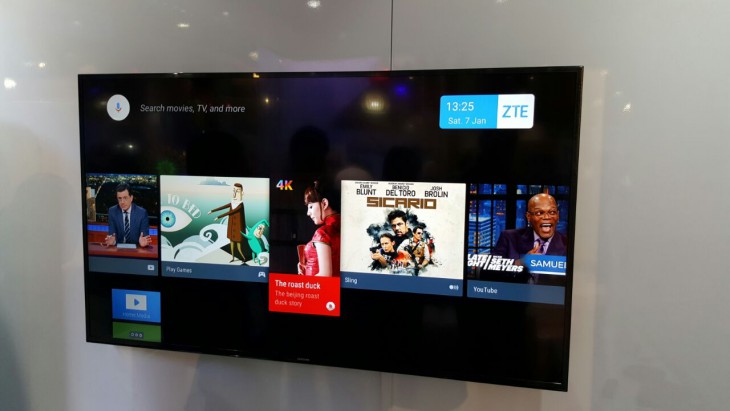 ZTE has a solid name as a white label manufacturer with a number of their products ending up re-branded and this appears to be what the ZTE (ZXV10 B800S2) Android TV box is for. There’s no pricing or release date for the box, and we may never see it again, but we could see it crop up again as a re-branded device from a cable or comms company at some stage down the road.