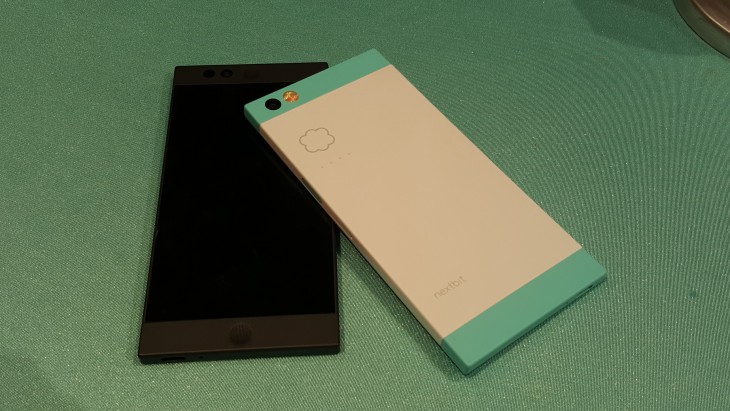 Nextbit made headlines in September with the launch of its Kickstarter campaign, seeking $500k for production of its Robin smartphone. Fast forward to January 2016 and the company is showing off working models at CES 2016, and is preparing to ship its products to Kickstarter backers and preorders.

Robin catches your eye at first because of its distinctive colour scheme with a strong use of the aqua colour the company’s used in its brand identity, along with light and dark complementary materials. It’s a standout, playful design that’s sorely needed in the current market. It’s well-built and it’s great to hold in the hand too, with no sharp edges despite the phone’s relatively squared-off design.

The phone’s no slouch on the specs front, either. The phone’s screen is a 5.2-inch 1080p display that’s beautifully bright with great viewing angles, a 13MP rear camera and 5MP front. On the face, there’s two front-facing speakers and – similar to Sony’s Xperia Z5 series – a fingerprint sensor in the edge-mounted power button. There’s a SnapDragon 808 running the show with 3GB RAM attached, and 32GB of onboard storage … and 100GB of cloud storage.

What’s that? 100GB of cloud storage? That’s new for a phone, and it’s central to how Robin overcomes your on-device space limitations.

Each day, Robin backs up everything important on your device – photos (and soon, videos too), apps and more. This only occurs under set circumstances (connected to power, on wifi, etc) and can be configured to completely avoid using your mobile data.

When your device runs out of space, Robin will select least-used items that have already been backed-up, and offload them from your phone to make space. Photos are retained as 1080p images (good enough to look at on your phone) and if you haven’t run an app in a while it’ll turn grey in the launcher to indicate it’s in your cloud storage.

The magic happens when you need the items that were offloaded. If you tap on an offloaded app, you’ll see a progress bar as the app is reinstalled ready to run. If you display a picture nothing happens, but if you zoom into it Robin knows you’ll need the original file so it fetches it from the cloud and swaps out the display of the file seamlessly – the effect is like seeing a low resolution image replaced with a higher resolution version.

The implementation of these cloud features does require Robin’s launcher and Gallery apps to work properly, which could be a limiting factor for those of us who like specific launchers. Robin’s also integrated these features into the Android OS file picker, so you can use any photo in their cloud service whether it’s on your device or not – if you select a picture that was offloaded, you’ll get the option to use either the local 1080p thumbnail, or download and use the original file.

If you backed or pre-ordered Robin, your phone will be coming your way in the next couple of months (it’s estimated to ship in February). Remember that the phone’s specs were updated soon after the launch of the Kickstarter campaign to include support for most of Australia’s 4G+ networks, so Nextbit is definitely aware of the amount of interest from us in their phone. If you want to pre-order Robin, head over to Nextbit’s Pre-order site where you’ll find the phone at just US $400 (about AU $575) alongside accessories like a USB quickcharger, a variety of cases and a screen protector. Pre-orders will be closing in the next couple of weeks, so get in quick.

For more information about Robin, go to Nextbit.com.

is this telstra 4gx compatible?? or telstra at all for that matter?