Chinese manufacturer Bluboo who have been releasing some decently specced and priced phones of late, has just announced more information about their upcoming low-cost Android Wear watch.

The watch, which will be released in February for US$99 or $145.53AUD according to pricing on BangGood and will come in a variety of different colour and band options, at least if the promo photos they’re using for the watch is correct. The Bluboo press pics, do suggest a ‘build your own’ style option similar to Motorola’s MotoMaker, though they haven’t announced anything along these lines as yet. 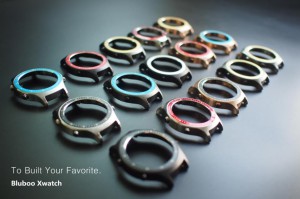 The specs for the watch have also been announced, with a Mediatek processor under the hood, with 512MB RAM and 4GB of storage. A 1.3″ 360×360 resolution oncell ‘retina’ multi-touch display with Sapphire Crystal glass is included, which they say is better than the Moto 360 and is close to the Huawei Watch. The XWatch will also come with a 480mAh polymer battery and be 9.8mm thick – thinner than the 11.4mm thick Moto 360 and the 10.5mm thick Apple Watch.

The XWatch will run Android Wear 5.1 according to their release, but with Google holding the reins with updates to Android Wear rather tightly we should see an update to Android Wear 6.0 coming at the same time as other watches.

Their base model appears to use a leather band however and come in a basic stainless steel, though as you can see from the promo shots, there’s various colour options for the body as well as bands, including a metal mesh band option. 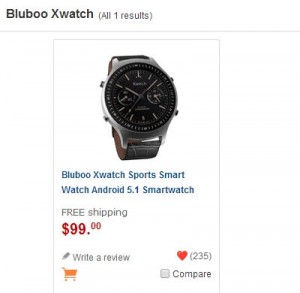 Bluboo sell their devices through a range of online retailers, including AliExpress, BangGood, GearBest, GeekBuying and lots more, and it’s listed on a number of those sites – though not for sale or pre-order as yet. We’ll be definitely grabbing one of these for a test run when they’re released. Bluboo have also released a range of images of the watch showing various applications, and watch faces, though the watch on display shows the mesh band which makes an appearance in the title image.

i think it could run a third-party OS based on Anroid OS, let’s be await and see what’s going on.

Their PR is adamant that it’s Android Wear – a number of watches have included third-party apps. We have a review unit on the way, we’ll soon find out.

That actually looks pretty good for the price. This could be the first Android watch to tempt me. Looking forward to your review.

Judging by the pictures it looks like it doesn’t run android wear and some sort of other variant of Android.