Home Mobiles Android OS and Updates Give your Nexus 5X a new lease on life with a new... 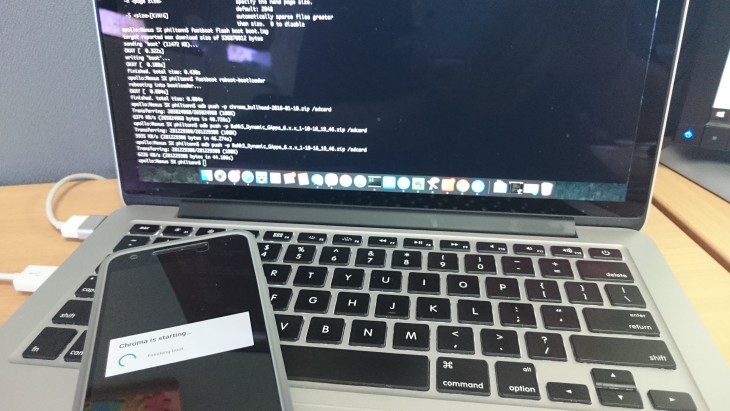 So you’ve purchased a Nexus 5X and you’ve found (like many of us) that the performance is significantly lacking and steadily gets worse as time goes on. Never fear, there is a way to get that new phone feeling again and gain some performance by replacing the stock ROM with a custom ROM and there’s a few options to choose from. Deciding on a custom ROM is a personal choice and you’ll need to do some research to ensure you get a ROM that suits your need – for reference I chose Chroma on the recommendation of our resident flasher Scott.

To change ROM the first step will be to ensure you have an unlocked boot loader. We have posted a guide on how to unlock the boot loader on your Nexus 5X which is a relatively simple process once you have ADB installed and running on your computer.

The first major step is to install TWRP recovery via fast boot. The latest recovery can be downloaded here.

Then, reboot the bootloader and access the recovery you have just installed.

This is the bit I had issues with, in fact I commented to Scott while working through the issues that I haven’t had such an awkward rooting experience since I was 16 (Ed. EW!) It should be as easy as this:

Unfortunately it wasn’t that simple; there were issues that I later discovered (thanks to Scott, the XDA Developers forums and some Googling) were known with this phone. The issues I suffered were related to decryption of user data and the recovery being able to mount partitions correctly to be able to write to them; I was able to adb push data over, but sometimes it was visible and the next it wasn’t. As soon as I rebooted my device the data I had pushed over was cleared from the device and as recovery was unable to mount the partition correctly I couldn’t’ flash the ROM. I was past the point of no return by now, a touch frustrated and running short on time.

The first was overcome by not just wiping the cache etc via recovery, but completely blowing it away via the fastbooot method:

This wiped any trace of my personal data from the device and resets the system to out of the box “factory” state. Which is a step further than a factory reset which does maintain some very basic user data and system files.

The second issue took a bit more searching and in the end, I was directed by Scott to the solution which (I should have known!) was on the XDA Developer forums; coincidentally on a page that also contained the resolution to the user data issue information. As it turns out, the cause of the partition mounting issue is the boot.img file that is supplied as part of the Nexus factory images. Lucky Chainfire has a modified boot.img file for a lot of devices, you can find the one you’ll need for your Nexus 5X here.

To change the boot.img file on your device, you’ll have to get out of recovery and back into fastboot mode and flash it

After resolving the boot.img issue and the user data issue, I was ready to give flashing the ROM and GApps over to my phone again. This time it worked perfectly; the process I followed was

After an hour and a half; lots of Googling, searching XDA and plenty of profanity my Nexus was alive again. As anyone who changes devices or ROMs on a regular basis knows, it takes some time to get all of your regular apps on your device again but since boot I haven’t had any further worries with my phone. If fact, the camera is (while not good) performing notably better than it does on the stock ROM. Who knows, I may look at another option in a couple of weeks time.

The reason for regaling my tale of headaches and stress is not specifically to scare anyone off from changing a ROM on their device, but more to make the point that; even though I’m quite comfortable doing so and have flashed a number of phones in the past, you can get caught out easily enough if you don’t take the time to really thoroughly do your research. Finally, should you get yourself into trouble as I did this time around make sure that you take a breath and figure out what the issue is. The likelihood is that even if you’ve soft bricked your phone, all you need is access to recovery and you can rescue it – even if you have to go back to a stock ROM.

Get on it and good luck.

My Nexus 5X is now five days old. The battery has settled after a few charge/discharge cycles and now lasts all day easily. Everything is working as expected so far and I have taken a few good pictures. I will sit and wait on all of these issues.

Already recommending a custom ROM for the Nexus 5X. That’s really not a good sign.

Get a toolkit from xda forums, make life very simple.
I also found my 6p to slow down and be always warm. Haven’t been able to find the exact cause as even stock with no apps it shows the device constantly waking with screen off.

What do you mean “get a toolkit”? Can you please be a bit more specific about which one so I know what to Google.

BTW, the article suggests a custom ROM to deal with performance issues. My 5X performs fine, but what is bugging me a bit is the battery life. Does anyone know a ROM that would have better battery life?

If your getting good performance you might be best to stick with stock rom and run a custom kernel. Just search XDA for 5X kernels that are best on battery.

Yes, gets hot when playing Youtube, especially when inside a case.

It also gets super hot when multitasking in car. e.g running Maps, PocketCast, and AutoGuard dash cam app simultaneously, causing it to reboot within 15mins due to excessive heat. I had to direct aircon vent to phone to prevent it from overheating.

Thank you for being HONEST and including what went wrong!! So often instructions like this negate the issues that can arise… and that’s when ‘it’ hit’s the fan!!