Home News and Editorial Editions at Play is an experiment in digital narratives and unprintable books,... 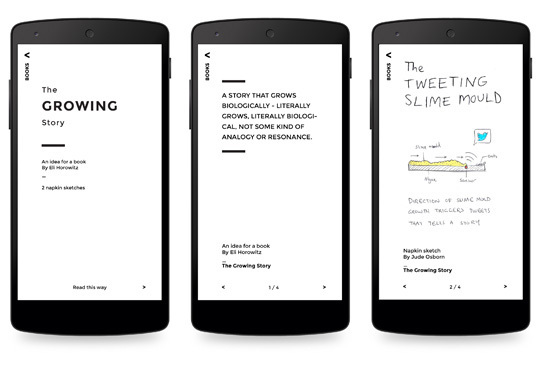 The product promises a new kind of digital book that combines the traditional experience of text-based reading with the power of smartphones and the web, merging the two into one content experience that provides dynamically-changing content that simply can not be reproduced in a traditional paper-based book.

The goal is to take the common argument on physical vs digital – that physical printed books have properties that can’t be translated to digital form – and turn it on its head, acknowledging that digital presentation of content allows for some narrative forms and qualities that can’t be achieved in print.

If the video’s not enough, the team also has a slide deck that outlines the new venture.

A new paradigm in books is only as good as your ability to access said books, and to that end there’s now an Editions at Play Store (that name could well get confusing, we know) that sells the books through Google Play Books.

The Store features two books at launch – Entrances & Exits by bestselling author (and film-maker) Reif Larsen features some 360-degree pathfinding and virtual storytelling; The Truth About Cats & Dogs is a “failed collaboration” between English poet Sam Riviere and British novelist Joe Dunthorne, allowing you to choose which author’s version of each chapter you want to read.

The Editions at Play Store also tells you what’s coming soon (there’s four books by international authors due in the first half of the year, but they’re only spilling the beans on two at the moment), and has a section for suggestions of books that could be created with the system from Googlers and noted writers. You can tweet “napkin sketches” or suggestions to the team via their newly-minted Twitter account.

You might also need to be careful about device compatibility – while iOS and Android are supported, some books “don’t like every device” (their words, not ours), so there’s a Try button to be sure your device is compatible. Hopefully this will be ironed out in the future to make Editions work on every device.

Are you interested in experiencing the next generation of books? Do you have an idea for an Edition? Tell us in the comments.

S by JJ Abrams should be in there. My brother has the hard cover copy of it. Very intriguing as it comes with inserts between the pages and scribbles between the lines. There’s literally more than one way to read that book. If it becomes available, it’ll certainly be a good way to spend my store credits.