Home News and Editorial Huawei’s CEO drops hints on Weibo (and Huawei on Twitter) ahead of... 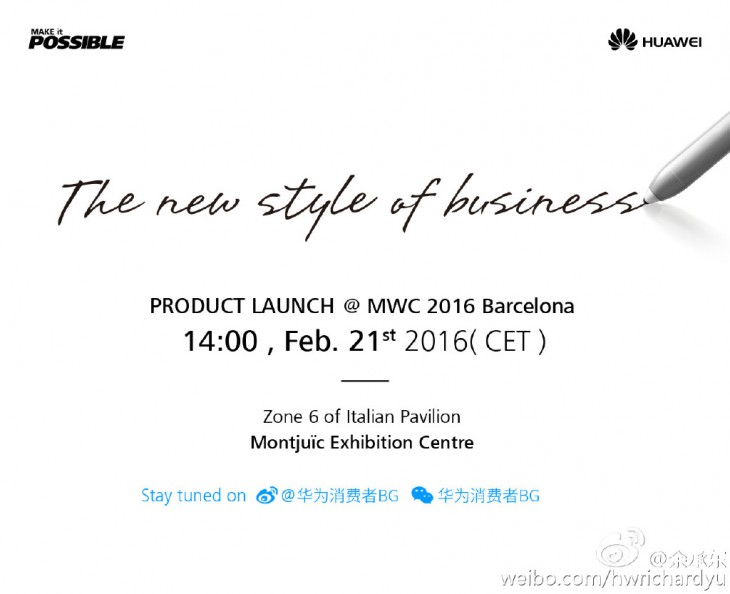 Huawei have already had a big showing this year, with a raft of announcements coming out of CES 2016 in January. With this in mind, we didn’t expect an awful lot from Huawei at MWC 2016, but given that they’re flying Ausdroid over, they have to be doing something, right?

Considering Huawei’s recent announcements, no one is really expecting them to surprise us so quickly with a brand new phone, or a tablet. Even a wearable sounds a bit questionable, given the relatively recent announcement of the Huawei Watch, and newer versions of the Watch just last month.

Well, Huawei’s CEO Yu Chengdong has taken to Weibo (a Chinese social network) to tease the upcoming announcement for 21 February, the details of which we already know. The date, time and location are unremarkable, but what it interesting is the new tagline which says simply “The new style of business”, and it’s being written by a pen that looks an awful lot like a stylus of some sort.

This leads us to revisit the MateBook rumour that we first saw a while ago, and reported somewhat more recently. Huawei have had a rumoured hybrid laptop / tablet in the offing for a while now, and this tease today does nothing to dissuade us from coming around to this view. Though we’re not awash with detail, at the very least we’re now potentially looking at a hybrid tablet/laptop with a stylus input, and rumour suggests it’ll be a 12.9″ device potentially running both Windows and Android in some sort of dual-boot arrangement.

On top of the post to Weibo, Huawei have also been posting some interesting content to Twitter lately with another tagline matching Mr Yu’s tweeted image: “Make It Possible”. When viewed together, the three tweets do seem to at the very least support the idea of a hybrid laptop/tablet, by suggesting people could be carrying less…. make of it what you will!

If you're already inundated at #work – why add that extra #NotMyBusiness pic.twitter.com/eLRXuaFcRx

Ladies, locked in the office on #Valentines Day or out on a dreamy date? pic.twitter.com/IaqpeFfaWB

While I’m over here digesting a bucket of salt, I’d suggest you join me; there’s just very little detail (and not much more rumour) about what Huawei’s got in mind for MWC, and they’re remaining tight lipped with press for the time being. Huawei have always been kind of good at keeping secrets, so I suspect we won’t know much more until Sunday when Huawei’s press conference kicks off in Barcelona.