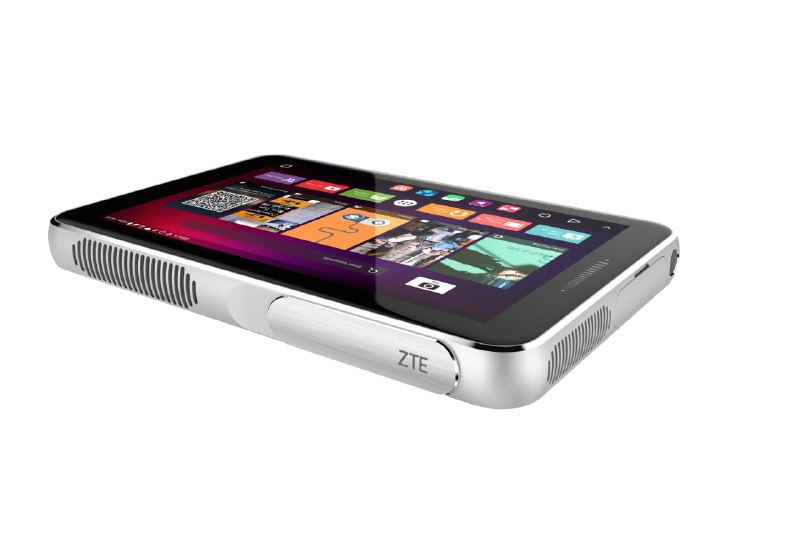 At Mobile World Congress today, electronics manufacturer ZTE has also been announcing new devices, including the Spro Plus, a smart projector that comes with an 8.4″ screen and runs Android.

The Spro Plus is a follow on from previous Spro projectors, but adds in new features turning the projector into a tablet. The Spro Plus includes a 2K resolution AMOLED touch screen, but ZTE has also added an option to add an external USB camera to add video conferencing capabilities.

The Spro Plus also comes in both Wi-Fi and LTE models, and packs a 12100mAH battery to make sure you can use the device anywhere.

In terms of projection, ZTE has chosen to go with a LASER setup rather than LED which will project at 500lm which at a 2.4m throw distance can project an 80″ image onto the screen or wall. The projector also includes both horizontal and vertical keystone projection and auto-focus to create a sharp and clear image.

As well as a great picture, ZTE is offering a superior audio experience with a JBL audio system built-in to the projector. The Spro Plus has two 4W speakers and a Harman sub-miniature microphone built-in, making it a great system to use for virtaul meetings.

When it comes to great audio, the Spro Plus features a JBL Audio System, which includes high quality audio outputs via two 4w speakers and a crystal clear voice pickup via high performance HARMAN sub-miniature microphones. The 5+ meter voice capability makes it easy to conduct group meetings in any location.

The Spro Plus is ZTE Mobile Devices’ latest example of igniting digital life with imagination. We’re proud of the Spro Plus which showcases a pioneering technology as a first-rate product and delivers an even more intuitive user experience which allows our users to have unlimited business and entertainment opportunities.

So far ZTE hasn’t announced any pricing or availability for the Spro Plus, but we’ll be following up with ZTE Australia to find out if there are plans to launch the projector here in Australia.

Did they add a Tablet to projector OR add a projector to tablet….lol

Yeah I noticed that, too. I don’t want to be negative but ZTE really seem to be missing the mark with some of their new devices.