February 26th is the day, today pre-orders for Samsung’s Galaxy S7 and Galaxy S7 Edge are being opened. The phones can be pre-ordered from carriers and Samsung themselves from today, with a bonus of a Gear VR headset – worth $159 – being thrown in for anyone pre-ordering either phone before the 11th of March – the day the phone goes on-sale in stores.

Samsung has priced the Galaxy S7 at $1,149 in Australia for the 32GB model, while the Galaxy S7 Edge will go for $100 more at $1,249 outright, with the phones officially going on-sale on March 11 at all four carriers if buying outright isn’t for you. The Galaxy S series is obviously popular for all Australian carriers, with all of them confirming the day of the launch that they would all be offering the phones. We’ve gathered the pricing for all the carriers, so you can see them all for yourself.

Samsung’s latest high-end phones have a lot to like, they’re fast, they’re stylish and Samsung has brought back two popular features to the Galaxy S line: IP68 water and dust proofing and of course the microSD card – though it can only be used for storage apparently, not for installing apps.

Samsung has refined the design of the Galaxy S7, which is made of glass and metal with better curves which they say ‘provide an even better grip and naturally fit in one hand’. Of course that camera is a great feature and with the f/1.7 aperture it should provide a stunning photo in low-light as well as in bright light.

Specs on the Galaxy S7/Galaxy S7 include:

Samsung is offering the phone for pre-order on their Australian website, as well as in their Samsung Experience stores in Melbourne and Sydney. If you want to purchase the phone directly from the manufacturer you’ll find them ready to order on the Samsung website.

So what options do you have? Well, Samsung is only offering 32GB versions of the phone in Australia in Black Onyx, Gold Platinum or Silver Titanium. They’re priced on the Samsung Australia website like this at $1148.95 for the Galaxy S7 or $1249.05 for the Galaxy S7 Edge. If you’re wanting to grab it from Samsung, head over and hit the ‘Buy Now’ button on their site.

There’s a variety of plans available for the Galaxy S7 and the Galaxy S7 Edge, Virgin Mobile is currently offer bonus data offer for people switching to the Optus network. Optus of course not only owns Virgin Mobile but provides the infrastructure for their cellular network, so check coverage before signing up.

Virgin’s pre-orders are now live on their website, so head over to virginmobile.com.au to secure yours.

Vodafone is also offering the Galaxy S7 and Galaxy S7 on their network. Vodafone has introduced a special plan just for the Galaxy S7, priced at $70 per month with 6GB of data included and of course unlimited standard national calls and unlimited standard national and international texts – oh, and travellers can also take all those inclusions abroad to over 50 countries for just $5 a day.

Vodafone will be offering the Galaxy S7 and Galaxy S7 Edge in Black, Silver and Gold, but as usual some colours are more popular than others so make sure you get your favourite before they sell out.

Telstra’s plans are now available to check out as well, with Telstra talking up their 4GX network which supports Cat 9 LTE offering up to 450Mbps in compatible areas in addition to VoLTE. Telstra is offering both the Galaxy S7 and Galaxy S7 on a range of standalone Go Mobile and Go Business Mobile Plans – or they’re offering a bundle package which includes a new Samsung Galaxy A Tablet with the Galaxy S7 for $99 per month on a Go Mobile Plan. Telstra’s pre-orders are now live and you can head over to the Telstra website to pre-order your phone now.

Optus rounds out the carrier listing for the Galaxy S7 and Galaxy S7 Edge.

Optus has both the Galaxy S7 and Galaxy S7 with 32GB of storage in all three colours: Black Onyx, Gold Platinum or Silver Titanium on a range of plans, but the highlight for the Optus selection is on the $130 plan which Optus has discounted by $30 for pre-orders on your choice of either the Galaxy S7 and Galaxy S7 Edge, with anyone choosing the plan getting all the inclusions for only $100 per month for the life of the contract.

There’s a range of plans on offer: 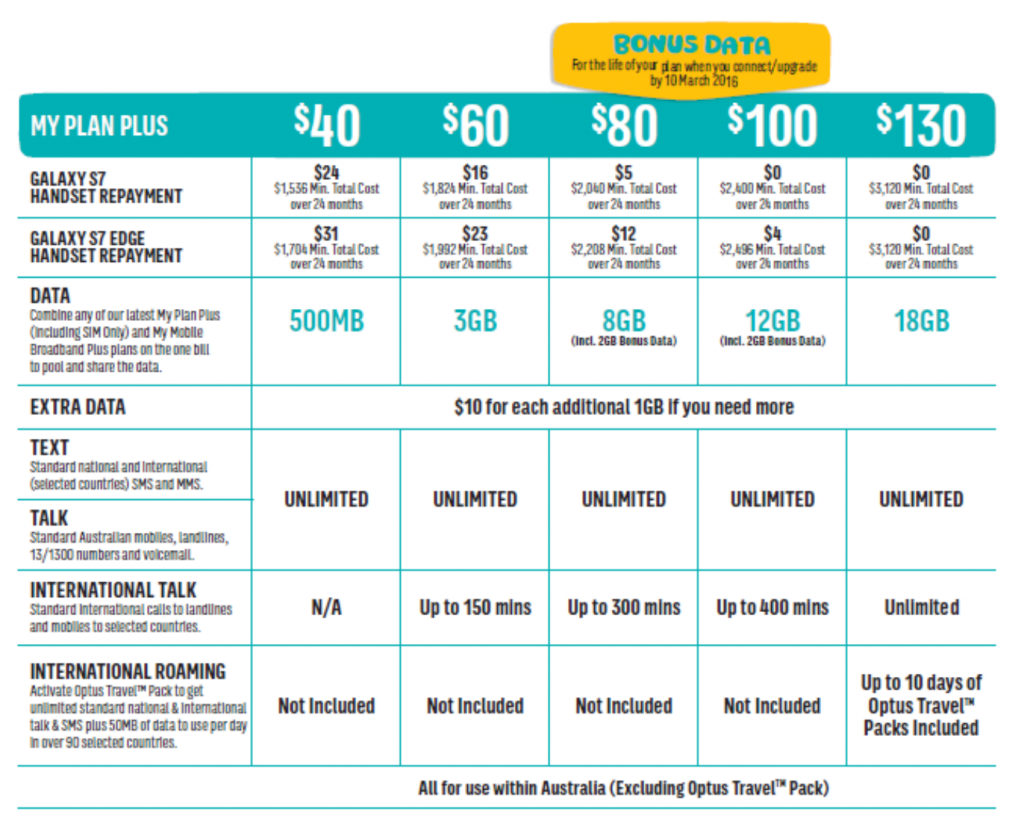 That’s it, we’ll be seeing retailers adding the Galaxy S7 and Galaxy S7 Edge to their inventory today, so stay tuned. We’ll see the Galaxy S7 in-stores on the 11th of March, if you’re holding off grabbing one, you may miss out on the Gear VR headset – and it’s a very interesting setup with quite a few benefits.

Which CPU does the Australian S7 get, the Snapdragon 820 or Exynos?

The real question is… do I want the S7 or the S7 Edge? I wouldn’t mind the larger screen and battery of the Edge, but I’m concerned the curved screen is just a party trick and I’ll grow to hate it.

Pre-ordered the silver Edge this morning. I’ve never been a massive Samsung fan, but the reports of a lighter/less intrusive TouchWiz gives me hope. It was my biggest complaint with the Samsungs (my last was a Note 3). Lately I’ve been going away from large phones (I had a Nexus 6 – what a tank!) and I literally had my mouse cursor hovering over the ‘submit’ on a normal S7. But right at the last second I decided to do a dimensions comparison against the Edge and my Nexus 5x, only to find the Edge is only 3mm taller than… Read more »

I want to know outright prices. I don’t like contracts because I like to switch to vodafone when I go overseas for $5/day roaming, then back to optus when I return. It would really suck being locked in for 24 months.

“…and of course the microSD card – though it can only be used for storage apparently, not for installing apps.” How is that so? Doesn’t Marshmallow natively allow to allocate/combine card storage as internal storage so it won’t be treated any differently? If Samsung has modified this and isn’t allowing apps to be installed on the card it is a huge blunder. Yes, most users won’t care as 32GB should be enough for apps but games are getting huge. It’s just poor for a flagship phone to be imposing artificial limitations against the core of Android. Thankfully I still have… Read more »

This is correct, Samsung with the S7 and LG with the G5, have chosen not to use the native allocation/combination of internal and SD memory because the card needs to be formatted and encrypted upon insertion and becomes one with the system and cannot be removed to transfer files to a computer etc…

This is the reason they have given and chose to use the simpler setup of using the card as external storage only.

After making this comment I did more research and I think I’ve come to a conclusion. This situation seems to be a combined blunder by Google and Samsung/LG. I say that because of the following. The way that Adoptable Storage works is that as soon as the memory card is removed from the phone (regardless of the phone being turned off the whole time) it won’t be able to read the card unless it’s resetup again. Reports from users who already have this feature are that when you boot-up the phone after you’ve removed and re-inserted the card (even if… Read more »

Just ordered an Edge through Telstra. Has the Gear VR listed as an add on bonus, so I’m guessing they didn’t sell run out straight away. Never had a Samsung, but thought if I’m changing, I may as well go all in and get the weird screen.

Can anyone confirm, however it appears that only Samsung and Harvey Norman are selling these phones outright? It’s late so maybe I’m going blind ….

Pretty sure the carriers will sell them outright eventually, but they will probably hold off for the first few weeks to months as stock levels get better. Apple and Samsung have this habit of limiting stock on launch to create artificial demand and generate buzz.

cant preorder , there is nothing on telstra page?! its 12:24 AEDT atm

The pre-order page has been live since 12.00 am on the dot. You need to head to the mobiles section of the webpage first and then it’ll give you the pre-order option.