While it took a while to get here, Google announced the new Chromecast here in Australia last month.

The Chromecast is available for $59 in Australia ($69 in New Zealand) from JB Hi-Fi, Harvey Norman, The Good Guys, Officeworks and Bing Lee as well as online through the Google Store. The next-gen Chromecast will only be available in Black at retail, while Google will be selling the Lemonade (Yellow) and Coral (Red) from the Google Store

I’ve been playing with the new Chromecast for a couple of months now, I ordered one in from the US when they launched, but they’re available here now, so the question is should you get one? Read on.

A brief run down for those late to the Chromecast party, a Chromecast is a HDMI dongle that plugs into your TV and is controlled from your smartphone or tablet. The Chromecast actually does the work connecting to a server and playing video on your TV, leaving your phone or tablet free for you to keep using it however you wish.

The downside is that you have to wait for many apps or video services to add Chromecast functions to their apps, something that’s been fairly limited here in Australia. Of our streaming services only Foxtel’s Presto, Nine Entertainment Co. and Fairfax Media’s Stan, the ever popular Netflix and surprisingly the Australian Broadcasting Company has added Chromecast support to their Iview app.

Still, there’s many other options, with Google offering Chromecast support in their browser which means you can cast your browser and any embeded video in the webpage to the Chromecast.

The Chromecast and its successor have limits, you can still only stream up to 1080P quality video, but Google are looking at 4K, they’re just not ready to talk about when or even confirm if 4K streaming will arrive.

Chromecast supports CEC (Consumer Electronics Control) which means your TV will respond to your Chromecast, turning it on when you start Chromecasting from your phone it will turn the TV on and change it to the correct channel or input. Of late you’ll also find that the Chromecast will respond to CEC commands in reverse, so hitting pause or play on the SmartTV remote will play, pause or stop the video.

The Chromecast 2 box contains the basics, the Chromecast 2, a power supply and a warranty card – that’s it. The box has a cardboard slip cover that keeps the box closed and on the inside of that is a quick setup guide and a QR code linking you to a page pointing to the Chromecast app on Google Play. Want to see it all unboxed? Check this out:

The original Chromecast is quite distinctive to look at, the new generation has been simplified down to a small circle which has a HDMI cable hanging out of it. The HDMI cable hanging out of the device is a replacement for the HDMI extender cable that used to come in the box; the HDMI extender built-in allows the Chromecast to be installed in HDMI ports with other cables in them easily. 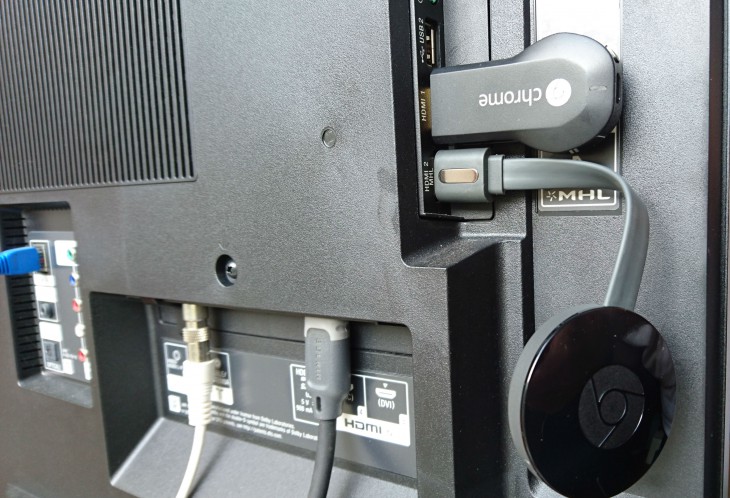 The Chromecast 2 also gets a magnetic point on rear on the device, the magnet lets you clip the HDMI extender to the rear of the device for easy storage or transportation – not that I’ll be hanging it off my keys, but it’s a nice difference.

Getting deep under the hood, the specs are similar, though Google has opted for a newer generation of Marvell processor, but storage and RAM are the same.

Though mostly the same under the hood, the Chromecast 2, next-gen Chromecast, Chromecast 2015 or whatever you want to call it has received a few much needed hardware updates mainly centred on the networking capabilities. Google has added in support for the 5GHz Wi-Fi band, as well as Wireless AC support. Wireless AC gives better transfer speeds – up to 1.3Gbps – and with a new 3-antenna configuration, which algorithmically selects the best signal.

Why is 5GHz support important? Well, for the most part if you look at the Wi-Fi networks on the 2.4GHz spectrum you’ll find it’s getting pretty crowded there. Switch over to the 5GHz band and you find a lot more freedom to move – basically it gives you a lot better streaming if you’re not getting people sharing the spectrum.

Is it worth the money

Without doubt, without the ethernet adapter they sell in the US, the Chromecast 2 is definitely the best option to get if you’ve been having issues with slow response or network issues at home.

At $59 the Chromecast 2 is a bit more expensive but it’s definitely worth updating – now you just have to decide if you want to get a Coral or Lemonade coloured Chromecast from the Google Store or the Black option from the many retailers who are now selling it.

“Of late you’ll also find that the Chromecast will respond to CEC commands in reverse, so hitting pause or play on the SmartTV remote will play, pause or stop the video”.

Is this just the new hardware or the original Chromecast as well?

This works for me with my original Chromecast

I’ve had no issue with cec on my original cc, why would it not work with the new one?

“…surprisingly the Australian Broadcasting Company has added Chromecast support to their Iview app.”

I’d say it’s more like the ABC has added the “cast” icon to their app and nothing more. Casting on iview is completely broken. Always has been.