Huawei is set to launch something new on April 6th in London according to save the date invites being sent out to press outlets.

The invite is fairly simple, with an instruction to ensure the 6th of April is clear and from what is shown, an obscured location and time – obscured except for the city, London. There’s been previous talk of April 6th being the date of the P9 launch and this all but cements it. 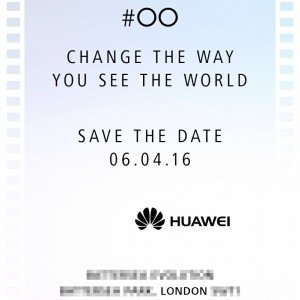 The invite does show a hashtag #OO which could point to the dual-lens rear camera on the rear we’ve seen in leaked shots of the Huawei P9. Huawei recently announced a partnership with camera maker Leica. Leica makes class leading hardware and optics for cameras and the partnership is expected to yield results in the P9.

We attended the launch of the P8 in London last year, where the phones hardware was an instant winner with us. We’re hoping to get our hands on the P9 just as quickly, and can’t wait for the launch to take place on April 6th.