Home Mobiles Oppo R9 launches in China, and it’s coming to Australia from $599 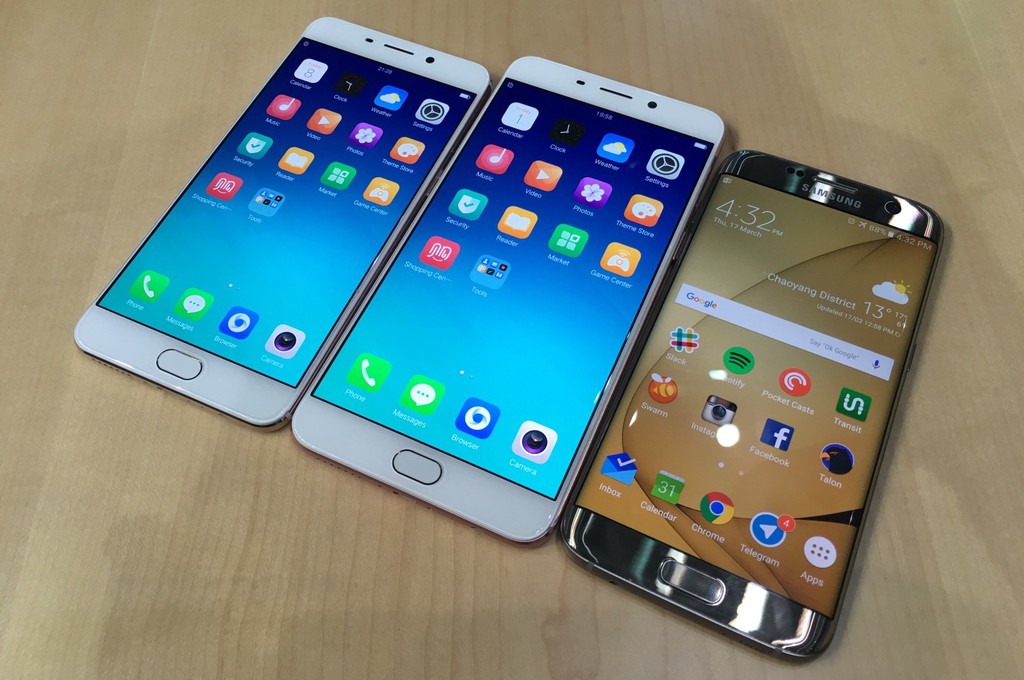 Oppo took over the Beijing Performing Arts Centre to launch the Oppo R9 and R9 Plus today. The presentation was made with a Chinese audience in mind; it was slick and polished, but at times hilarious, with Oppo describing their new ColorOS software compared to the previous generation as like “a fat man losing weight”, and describing their selfie camera as one that can make you “look whiter and better looking”.

The R9 is undoubtedly Oppo’s flagship phone, but it’s priced to fit into the midrange in Western markets. The true flagship – the Find 7 – is starting to feel a little old and creaky, and by the sounds of it we may not see another Find in the west. Oppo are aggressively focussing on the mid range market outside China. When asked about lines outside the R family, they talked a lot ‘focus’ and doing ‘one thing well’ this week.

After the launch, I had an hour or so to go hands on with the R9, and here are some quick thoughts on the device.

The 5.5″ OLED display looks fantastic, as you’d expect. It performs as OLED should – blacker blacks, beautifully crisp images, and no colour bleed. All in all, the kind of fantastic screen you’d expect to see in a flagship phone is here in a mid-range, mid-priced phone.

The Oppo R9 is a flagship phone at a mid-range price, and it feels amazing.

In the hand, the device feels light and thin. From the back, the design looks an awful lot like an iPhone 6+ though it’s lighter, and has a smaller footprint. Looking at the screen, it feels more like holding Samsung’s Galaxy S7: the device feels smaller than the large screen would have you believe thanks to the overall thinness, smaller bezel, and reduced “chin and forehead”… or, maybe I’ve just been beaten down by years of giant Android phones, and 5.5 inches is starting to look reasonable to me. Either way, it was comfortable to hold in my tiny little hands, and I was able to type quickly with my tiny little thumbs. Despite the smooth rounded edges, the device doesn’t feel slippery to hold.

Here’s the comparison of unlocking the S7 to the Oppo R9. pic.twitter.com/2HKvFzXOIJ

The R9 comes with a built-in thumbprint reader, another feature you don’t often see on midrange phones. This is great news! I mentioned on last week’s DTNS that I won’t use a phone without a thumbprint unlock any more — the convenience and security it provides is just that important to me. However, not all thumbprint readers are created equal, so I tested the R9’s speed, and found it actually beat the current flagships from Samsung and Apple. The super fast animations of ColorOS make the unlock feel even faster than the S7 and iPhone 6S+ I had with me for comparison. This alone is enough to recommend the R9 over most of its competitors in the midrange, and even a few in the high end.

Oppo talked up the camera in the phone, as most smartphone makers tend to do. They spent an amusing amount of time of their presentation on the “selfie” camera, and their “advanced selfie technology”. They’ve partnered with Samsung for the front facing camera, and have included Beautify 4.0 – kind of a live photoshop for selfies, if that’s your thing (it’s not my thing). The default settings were so intense, subjects in the example photos looked like anime characters following their Beautify ‘improvements’.

The rear facing camera is 13mp with a f/2.0 aperture, but Oppo claim the ISOCELL technology makes it four times more sensitive than standard cameras, increasing the dynamic range of the image, and adding in the ability to snap shots in low light. I’ve only had a few minutes to test out the camera, so I can’t make a call on those claims either way. I will say the R9 performed well in the few shots I have taken though, and it’s probably one of the better cameras at this price point.

It’s still a damn fine camera at this price point though.

I snapped a few shots of some fruit, other journos, etc with the iPhone 6s+, the Samsung Galaxy S7, and the Oppo R9. We weren’t able to get the shots of the phones here just yet, so my quick comparison: The iPhone has the most muted colours, but the highest detail when zooming into an image after the fact. The Samsung S7 tends to boost the colour on images, which sometimes looks weird in high colour, high contrast settings, but it’s by far the better camera in low light. The Oppo is a damn fine camera, closer in image to the Samsung, but less detail than both cameras overall. Expect a full review from Ausdroid at a later date.

The R9 features Oppo’s signature VOOC fast charge technology, but this was a disappointment if we’re being honest. At last months Mobile World Congress, Oppo showed off their Super VOOC technology, which can charge a dead phone to 100% in less than 15 minutes. I was hoping to see Super VOOC in the brand new R9, but alas, it’s just regular VOOC. Regular VOOC is still pretty damn good, in that it can charge the phone’s 2,850 mAh battery up to 70% in around 30 minutes, but all this talk of Super VOOC had gotten my hopes up.

ColorOS is back, and it’s upgraded to version 3.0, bringing with it some speed improvements in app launching. ColorOS is an Android variant that has an uncanny iOS 7 feel to it — it looks far more Cupertino than Mountain View. Icons are bright and colourful, menus are translucent, even the animations in and out of apps feel iOS-influenced. Tellingly, Oppo compared the fast launching of ColorOS 3.0 to iOS 9, not to Marshmallow.

Though not to everyones tastes, Oppo is proud of ColorOS, and it is pretty.

Oppo is clearly proud of ColorOS, and it seems to be a hit in Asian markets, but the reception in the west has been a little less positive (Phil didn’t like it much in his review of the R7S). It’s not that ColorOS is bad, it’s just … I don’t know. It’s Weird. As soon as I posted some shots to Twitter, the comparisons to iOS came rolling in.

I’m hoping the R9, when it comes to Australia, will have an AOSP option, or a CyanogenMod choice. It’s possible, given Oppo shows more support for aftermarket ROMs than most smartphone manufacturers, even linking to guides on flashing their phones on their offical site.  Other manufacturers are doing it — OnePlus has built a cult following around its CyanogenMod-based phones — and Oppo themselves are building AOSP-like ROMs for their Find series phones.

For you spec nerds, the phone is running a MediaTek Helio P10 2.0GHz eight-core, 64-bit processor with 4 GB of RAM. I have no idea how that compares with the more common Snapdragon processors, or Apple’s A9, but the phone felt plenty fast jumping from app to app. The device features two SIM slots for those with a work and home SIM, and one slot can be used to bump up the onboard storage via a Micro SD. Both slots are capable of 4G and VoLTE HD voice calls. Stepping up to the R9 plus will get you a 6-inch screen, a 16mp camera and and a Qualcomm Snapdragon 652 processor.

The R9 should be hitting Australia in around two months, following negotiations with local carriers. Oppo has existing partnerships with Optus and Telechoice at the moment, so expect to see the R9 there first. Last year, Oppo created ‘experience zones’ in Dick Smith stores around the country, so customers could play with real working devices in store. With the collapse of Dick Smith, Oppo has lost this key part of their retail strategy. I hope they can strike a deal with another chain before the R9’s launch — a brand like Oppo, relatively unknown in the west, really needs a place where customers can go hands-on with a working device if they’re to compete with the likes of Apple and Samsung.

Will the Oppo R9 be the first device to ship to more markets than Asia and Australia? Oppo’s reach in China is huge – there seems to be as many Oppo stores in Shenzhen as there are Starbucks in New York. Outside of China though, the company has mainly focussed on South East Asia with Australia being the first western market it’s dabbled in.

The company’s recent sponsorship deals suggest they’re poised to launch in both Europe and the US. Last May, Oppo became the major sponsor of European League team FC Barcelona, and followed up with a sponsorship run of America’s Next Top Model in the United States. I wonder, do these two deals represent the highest amount marketing dollars a company has ever spent in markets they’re not actually in? It makes Oppo a fascinating company to watch.

Overall, the R9 is another phone from Oppo that punches above its weight. The screen, build quality, camera and thumbprint reader are comparable to high end phones from Apple, Sony and LG, and Oppo’s VOOC battery technology sometimes betters the high end of the market for a quick recharge. I’ve thought for a while now that the most interesting phones are coming out of the midrange and lesser known Chinese brands, and Oppo are certainly living up to that.

Peter Wells travelled to Beijing as a guest of Oppo.

Oppo does it again. A new phone series with slight improvements in every aspect – definitely enough to justify the extra $100 over the R7 Plus, which I bought nearly 6 month ago – it is an awesome phone in it’s own right – best value for money big phone at the moment but the R9 Plus will obviously again represent value buying. Not a fan of the front physical Home/Scanner button nor the fact it is a little taller but is ever so slightly less in width, thickness and weight. Hopefully still to Oppo’s excellent build quality. As the… Read more »

Nice one Peter. Thanks for this take on the new Oppo. I am also super disappointed with the lack of super VOOC. Not so sure about the button down the bottom in the middle. but give me some super vooc and i could possibly overlook that.