HTC’s new flagship, which will be unveiled in an online event on April 12th is apparently going to be a monster if this new leak is to be believed. The phone has shown up in a picture, which shows the Antutu benchmarking software results comparing the phone to amonst others, the Samsung Galaxy S7 and beating it handily.

The shot shows off the home key at the bottom of the phone, which is also believed to be a fingerprint sensor. The phone in the picture beats not only the Galaxy S7, but Xiaomi’s recent Mi5 and the iPhone 6S as well. 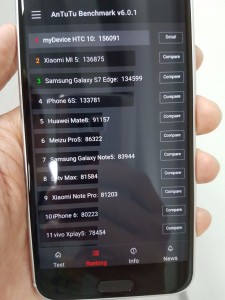 The result should be taken with a grain of salt, benchmarks can be faked, this may or may not be final software, and there are a tonne of other factors to consider, but we can dream.

So far the rumoured specifications for the phone, which rumour says will be named the HTC 10, will include a 5.15″ SLCD5 display with Snapdragon 820 SoC, 4GB of RAM and a 12MP camera with Ultra-Pixel sensor. The phone will also apparently come with BoomSound speakers, though not front-facing based on this picture as well as previously leaked images. Powering the phone will be a 3,000mAh battery.

htc dont put finger scanner on back side and become expired,put it on front and earn profit,add wireless charging and sdcard and IR,if not i’m planning to throw out these android devices and switch back to iphone 6s plus and later i would buy one nexus device or note 6 for my android usage,thats it

At the high end, there doesn’t seem to be much to separate phones – they’re all going to be fast (who really cares about one out-benchmarking another?), have nice screens and finger print sensors etc. The one thing, other than really good camera quality, that would really differentiate is battery life – and the only company who seems to be doing anything about that is LG with their “friends” modules. I’m really looking forward to seeing some G5 reviews when it’s released.

I’d say Samsung made some good moves to improve the device battery size, and performance, and these days
with the better software I think swappable battery while nice to have as an option is less of necessity with the latest devices, the software is getting better/more optimized.
How many hours on screen time do we need ?

I just want to be able to go a whole day without having to scrimp and save battery so there’s enough for the bus trip home. On my new Nexus 5X with the latest and greatest “better software” that’s not possible, and I think in this day and age that’s simply a fail. By all accounts it was also a fail on Samsung S6 so let’s hope the S7 nails it. But somehow I doubt it because “better software” doesn’t do the job.

Reports are the S7 is pretty decent, and a big improvement on the S6, and the edge is even better again ,
Indeed Software and optimization helps , but it’s hard to beat a device with a bigger battery,
My Nexus 6p is an all day device with i would say normal to reasonably heavy use, , my note 4 is also, maybe even a tad better because i have a dedicated battery saver app(still waiting for marshmallow ) .

Both the S7 Edge and Note 5 have excellent battery life; optimisation counts, but at the end of the day, more powerful hardware demands more battery capacity. Samsung have addressed that, and LG are doing it a different way, with modular batteries and/or add-on batteries.