When Android Auto was first announced I was super excited about the possibilities it represents. For too long we have all suffered with the woefully inept in-car entertainment systems. As soon as I saw the opportunity I installed Android Auto into my VF Commodore and was nearly immediately disappointed (review coming soon I promise).

In the interest of safety and keeping the driver’s eyes on the road Google limited Android Auto interfaces to 6 taps only. No more. Android Auto would throw up an error as seen below: 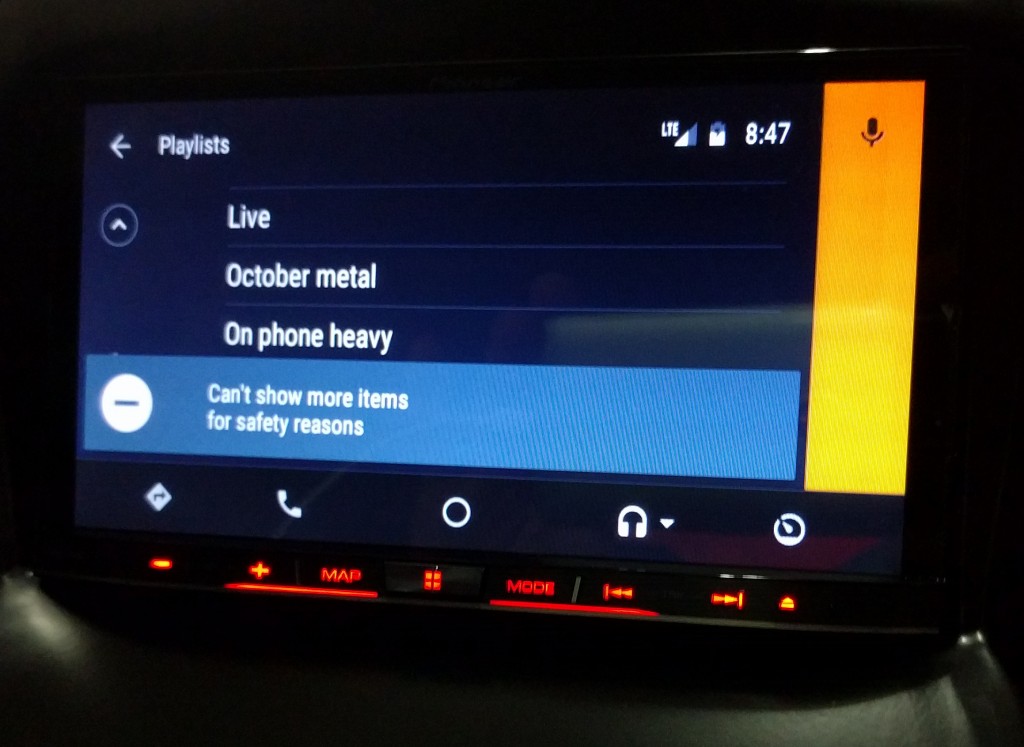 If you had a list of playlists there was no way to get to a playlist at the bottom of your list- try using voice recognition in Google Play Music to find one of your playlists. Try searching for a certain album. Nearly impossible. At one stage I attempted to play a play list I have that is titled “Old Skool HipHop”. Apparently there is a song called that. I found myself using my phone more than ever to find the media I was searching for. The opposite of Google’s intention.

A few days ago a version of Android Auto was ripped from a Samsung Galaxy S7 and shared with the world. Now this version – version 1.6 – has hit the Play Store and brings many new enhancements and fixes including


A lot of users had been complaining about connectivity being sub-par with their Android Auto units so hopefully this brings fixes for them.

As for the second fix this has made Android Auto near perfect for me. After using it for two days now I am finally happy with Android Auto. I can now scroll through all my playlists, queues, library etc. I can scroll through the TuneIn radio stations entirely, Pocketcast is now no longer limited (hint- sub-folders helps here even without the new fix). To attempt to show the new fix I have spent a long time driving up and down the driveway simulating it. In the end I enrolled my 7 year old son to help (he took the photos, I drove). Meet the new Mr Blurrycam:

It’s good to see Google expanding Android Auto so many more countries as well. With many new cars now being launched with Android Auto as a factory stock option it will definitely see Android Auto improve in the future as there are more and more users of it demanding more and more. If you don’t have it yet I implore you to check out one of the units out there before purchasing any new headunit for your car.

Are you an Android Auto user? Will you ever be?

can I install android auto app on mylink as bringgo has stopped the voice guidance for android OS version 8.0 and say it is not their fault but mylinks and android.

How did you install the android auto app on the mylink? I would do as well.

Does Android Auto support navigation using steering wheel controls? That would be far safer than a touch screen IMO and would remove the need to lock out navigation when the car is moving.

Stock head unit yes. So, the holden ones built in do but my car/pioneer only does volume. The tap to open Google search on steering wheel doesn’t. It does on stock Holden spark/captiva

I don’t mind the new implementation. It makes sense to me and makes it usable.

I really hate any head unit which prevents you from doing things while the car is moving. Our Honda CRV head unit with integrated GPS makes us acknowledge some crap warning EVERY SINGLE TIME WE TURN THE CAR ON, before we can use the head unit for anything, and the GPS can only be programmed while the car is stationary. I totally get the “safety” arguments as to why it is programmed that way, but they only apply when there is no passenger in the car, which is usually the case if we are going anywhere that requires GPS. Not… Read more »

Makes sense re the passenger but unfortunately there are a large number of accidents caused by people not paying attention to the road and using stereo/phones etc.

I got the update yesterday, but I still can’t see the full library even when parked with the handbrake on.

In GPM? I could see all my playlists. The full library you are right. That’s their gimped AA version on GPM unfortunately.

The updates have helped massively with connections in my MY16 Golf. Before my Nexus 5 would connect about 5% of the time (I actually gave up even bothering with it). Now it will connect pretty much every time.

Responsiveness could be improved through, some times it will ‘beep’ as though a touch had been registered but nothing will happen. Not sure if that’s the phones fault or the hardware.

Yeah. I’d heard of vw having issues with that. Glad it’s fixed your issues.

Same with mine too. Seems to connect to my VW system consistently now.

How did you install Android Auto in your VF commodore? Address your still using the factory MyLink?

Not easily is the answer to that David. I was so disgusted with MyLink I ripped the entire thing out. Had a custom fascia built for the pioneer unit. I they had to cut part of the dash away etc. All MyLink and car settings run thru the pioneer now no problems. The guys at DC garage did it for me. A warning though, it was a project that got more and more expensive the further it went. but am very happy to have android auto and not MyLink anymore. The MyLink is sitting in attic storage. Wonder if anyone… Read more »

Oh wow! I was hoping you’d say you plugged in a dongle at the back and ran a SW update. I think the MyLink system is terrible and don’t get me started on Bringo Maps. It’s a shame that Holden hasn’t put the newer MyLink with Apple Carplay and Android Auto that the Captiva and Spark have for the Series 2’s.

I agree totally. I think they are sheepish about it too. When I was at holden it head office a few weeks ago I asked why they didn’t and they looked very sheepish when saying they focused more on the engine etc… I suspect they also wish they had.

I think it comes down to money (or lack thereof) with Holden. I have had a VF Commodore since Oct 2013 and the lack of feature updates to MyLink is noticeable. If GM gave Holden more money for the Commodore, then I suspect that there would have been an upgrade to MyLink in the VF Series 2 as well as the LS3 V8 engine.