Google updated their desktop client this week, bringing the ability to select sub-folders to sync within Drive, but their Android app also got an update as well bringing inline uploads.

Not sure what inline uploads are? Google describes the new feature as: 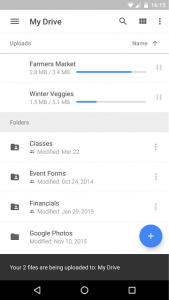 Google is rolling the update out to Android users over a few days, but as they announced this on Thursday, you should be prompted to update your app through Google Play now.