Home Mobiles LG brings the G5 and Friends to Australia from 2 May from... 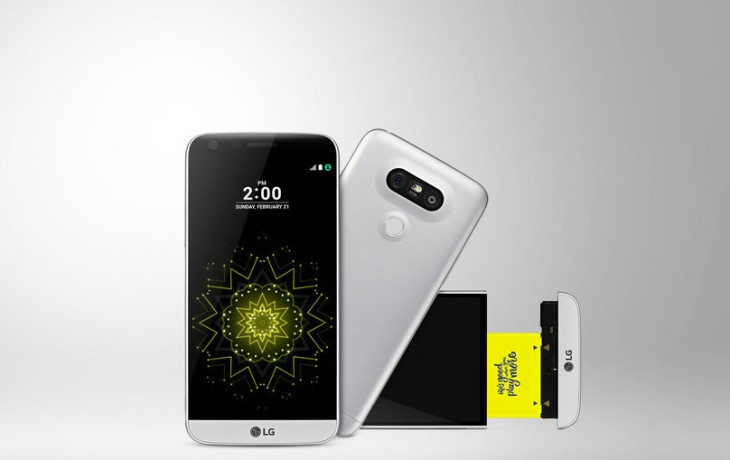 LG’s new G5, featuring a metal unibody design with removable battery, will go on sale next month alongside a collection of accessories known as LG Friends. The G5 will be available from Optus stores and retail partner Harvey Norman from May 2, and from Telstra Stores the next day on May 3.

The LG G5 will be $1,099 at launch, a bit lower than Samsung’s Galaxy S7 range, and it will be available on a variety of carrier plans as well.

We are delighted to bring the LG G5 to Australia. This is a standout device in the smartphone world with a unique design, removable battery, innovative camera set-up and collection of compatible companion devices. Everything about the LG G5 has been designed to enable users to have more fun with their phone and give them a new experience; we think Australian consumers will love the G5.

What else is coming?

Most of LG’s Friends will be coming to Australia too, with pricing also confirmed today. The details are as follows:

On top of this, LG has announced a spare battery / charging kit combo that will be available from $69.95 at Telstra stores in mid May. This kit comes with the spare battery, and a portable battery-bank style charger/carrying case; not only can you take the battery out and pop it in the LG G5, but you can use the carrying case to charge your other accessories if they get a bit low on juice too. It’s a great idea.

What special offers are coming?

While the carriers will no doubt come up with their own incentives and offers to launch the handset, what we know at this stage is that LG will be doing a special offer for early customers. Users who accidentally break their screen in the first six months will be entitled to one free repair courtesy of LG, as a way of making sure that customers are happy and stay so.

We’re also aware of a launch offer from Harvey Norman, which will include an LG CAM Plus module with pre-ordered devices which will be open tomorrow (21st April). We’re waiting for more detail on this, including dates or limitations on the offer, which we’ll report when we can.

Wow, that was even higher than the earlier estimates.
If HTC doesn’t price the 10 out of the park like this, they will be on with a winner.

Can someone please ask LG Australia why they are incapable of launching a product correctly. They constantly have huge delays from announcement to launch and then come in at ridiculous price points with no regards to where they actually sit in the market.

Sick of these $1k+ phones. No matter the specs. Ridiculous

Yeah… nup. $400 for the 360 cam?
If they’re going break the $1K barrier on the phone, I think they should at least incentivise the purchase of the novelty accessories.

Oh, the 360 Cam might well be worth that price. The competition is quite a bit more expensive and while I’ve not had too much time to play with any of the stuff we got from LG today, the 360 Cam feels very, very cool.

Being LG it should crash in price Fairly quickly. I think they’re dreaming at that price

$70 for the spare battery and cradle? I paid an extra $20 with my G4 recently. All up, it was $459 on eBay and the price has since fallen. The G5 isn’t worth double the price, with a smaller screen to boot.

Can anyone point me in the direction of a good camera comparison against other 2016 flagships?

Give us a few days and we’ll have one 🙂

Droid life recently did a comprehensive comparison of the HTC 10, Galaxy S7 and G5. (Hint: the G5 does not come out on top in any regard.)

thought they will give the spare battery for free like they did in US, Lame