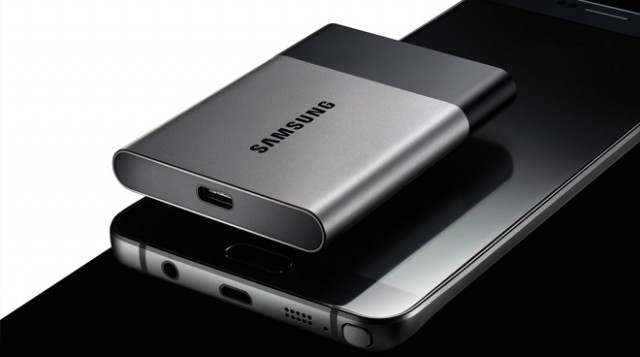 Samsung has announced a follow-up to its tiny-in-size but huge-in-capacity portable SSD (solid state drive) which allows you to quite literally take as much content with you as you realistically could use. Available in a range of capacities from 250GB to a whopping 2TB, the Samsung SSD T3 is tiny on the outside, measuring at just 7.4cm long, 5.8cm wide, and just over 1cm thick.

Compatible with a range of devices, including Android devices, laptops and desktops, the SSD T3 can transfer data over a USB 3.1 connection to move more than 450MB per second, allowing you to take your pictures, music, movies and more on the go — if you’re a professional photographer, you could have all the storage you need in your pocket. If you’re travelling (as I often do) this could be a very easy way to carry a lot of entertainment with you on the go. From the looks, a simple USB-OTG adaptor (we sell those) would be all that’s needed to get Samsung’s SSD T3 working on your smartphone or tablet — too easy.

For everyone else, there’s features that many would find useful. Being an SSD, the Samsung SSD T3 can withstand knocks and bumps without any adverse impact on the data thereon, and your data can be secured with a 256-bit hardware encryption option as well.

Can anyone recommend a good app for playing music from an external source using USB OTG? On my Nexus 5 I can’t see the music in the Google Play Music app so need something else.

Only place I found mentioned of type-c was in the pdf.
“Now, wherever people travel, their data goes with them. The T3 comes with a USB
3.1 Type-C connection port and a Type-C to Type A cable for increased information
transfer speeds and compatibility with more devices.”

It’s USB 3.1 (USB-C). Which you can see in the picture. So you’ll need an extra adapter for the OTG cable as well 😉

Chances are the SSD will come with a USB-C to USB-A cable, so a normal OTG will do the trick 😉

Will
Reply to  Chris

Good point. Didn’t even think of that

Source: I’ve been rocking the 512GB model (ordered from Bing Lee) for a couple of weeks. Also have a T1 512GB which was already incredible.