Samsung has their fingers in a lot of pies, it’s one of the reasons that they’re so successful as a consumer electronics company. One of the areas they specialise in is memory, and overnight they announced a new high-end microSD Card for premium smartphones and tablets, 360-degree video recorders, action cameras, and drones, or essentially anyone wanting a lot of storage with fast read/write speeds.

The new EVO Plus 256GB microSD card is definitely a lot of storage, the card will record up to 12 hours of 4K UHD video or 33 hours of Full HD video – that’s a lot of video. The card is also fast, in tech terms it’s a UHS-1, Class 10, (U3) compatible card and uses Samsung’s V-NAND tech, in real terms that allows Samsung to achieve read/write speeds of up to 95MB/s and 90MB/s, respectively – that’s fast. 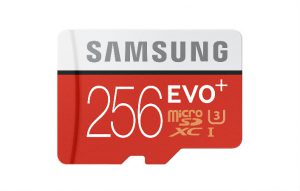 The thing may look small, but it’s hardy too, so don’t worry about your photos or videos being destroyed. Samsung says the EVO Plus card is covered by a 10 year limited warranty, but specifically states the card is Waterproof (IEC 60529, IPX7), Temperature-proof, X-ray-proof & Magnetic-proof.

Samsung will be releasing the card in the USA, Europe, China, and other regions next month for $249.99USD (around $340AUD). We’re hoping Australia is counted among the ‘other regions’, we’ll be following up with Samsung Australia for more information when it is launched.