Home Smart Home and Wearables Around the Home Samsung’s 2016 SUHD, UHD and HD TVs have landed in Australia 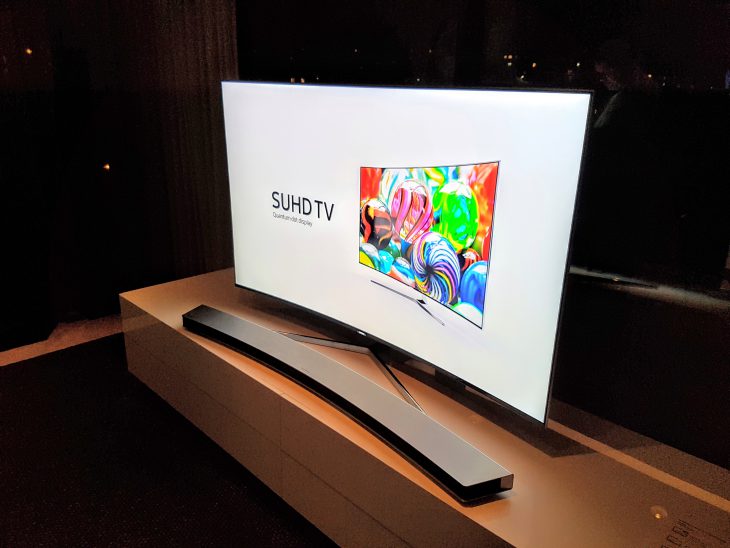 Samsung tonight took the wraps off its 2016 model TVs, bringing what it calls “the ultimate TV experience” to Australia with a number of SUHD, UHD and HD models coming to market. That’s a bold claim, but the company’s new models have much to recommend them.

The company told us at the Galaxy S7 launch that they’re listening to consumers more, and this is especially evident in the research that they conducted to find out what’s irking consumers and going out of their way to fix it.

The new models – KS8000, KS8500, KS9000 and KS9500 – place a huge focus on design with Samsung telling us that TVs are no longer hidden in living rooms around the country, rather becoming the centrepiece of the living room and for some households even social interactions.

With stunning looks from any angle (even behind it), the obvious focus is on the company’s top of the line KS9500, a curved SUHDTV model with 4K and support for HDR content. It’s using the company’s Quantum Dot technology that affords each pixel on the screen its own individual light source, so bright spots are vivid and bright while their Ultra Black technology reduces glare on the screen ensuring blacks are the absolute absence of light. Samsung’s confident that these TVs will hold their own in the wide variety of lighting conditions seen in Australian homes.

That’s not to say the standard flat panels are forgotten. They’re now super thin but still benefit from Samsung’s attention on the design and software fronts. We were treated to a demo of some 4K UHD content – conveniently playing back from Samsung’s just-launched UHD Blu-Ray player – and the level of detail on offer on a TV screen that could be sitting in a loungeroom was pretty amazing.

As someone who’s often claimed to hate Smart TV user interfaces, I’m pretty impressed with the effort Samsung’s put into the design and simplicity for its 2016 TV range. The Tizen platform is really reaching maturity – at least for smart TVs – and the company has turned its attention to delivering solutions to actual problems like sorting through inputs on the TVs and controlling multiple devices easily.

Samsung’s put a huge emphasis on the software this year. While previous years have seen a platform reaching maturity, this is the first year I’ve looked at their smart TV interface and decided yep, I’d like to have one of those in my house.

If you’re using the 2016 TVs, you won’t need to care which HDMI port you’ve plugged any of your devices into. The TV will figure out what it is, name it and add it to the “source bar” – a customisable UI element that sits on the bottom of the menu screen (the Smart Hub) and offers all your connected devices along with some of the most recently used apps. A second line on this menu allows apps to populate it with content, so if you haven’t finished an episode of a show on Netflix you’ll find that content surfaced when you select Netflix.

The TVs will also help you control other connected devices by passing along your menu actions over HDMI CEC, so you can control your devices with a single remote. Some models will come with a universal remote in the box that can also control other devices over IR.

Not content with a world-beating TV experience, Samsung’s also delivering an updated range of sound bars in 2016, and there’s something that’ll match the designs of both flat and curved TVs in there. One of the neat additions to the 2016 range is the ability to add wireless rear speakers to a soundbar range, bringing you proper surround.

The TV range is broken up into numbered “series”, with a variety of TVs from different ranges in different sizes within. In general, the higher the series the better the TV – but you’ll of course pay a price premium for it. Series 8 and 9 are the SUHDTV models, and you’ll remember that Samsung doesn’t apply the “S” branding to anything unless its certain it’s the absolute best they can offer (Galaxy S, Tab S, etc). The Series 8 sets run from $3,599 to $5,799 and Series 9 from $3,999 (55-inch) right up to $10,999 (75-inch) – for now. There’s a couple of other sets due to launch within the next couple of months that will likely push that figure upward.

Soundbars start at $399 and go up to $1,599 with the additional rear speakers running just $179 – a nice option to add surround sound without breaking the bank. Samsung’s TVs are coming to market now, with most of the new models becoming available in May or June with some of the higher-end models launching July/August.

While the prices for the super high-end models are pretty out there, Samsung still wants consumers to know that each model is an advancement on the previous year’s in a number of ways. Remember also that technology moves downmarket over time, and this year’s top of the line features will find their way into more affordable models in years to come.

With TV sizes trending upward, if you’re in the market for a new TV you likely know what you’re in for in terms of investment already. There’s nothing here out of the ordinary in terms of screen size and technology, but the software smarts really make Samsung’s new TVs worthy of a look.

Photographing electronics at launch events is often difficult, and you can see from some of the photos above that the lighting in the launch venue tonight was often a little dim. Fortunately, Samsung’s made PR shots of the main line TV models available:

This is not the Android TV im looking for.

while cool new Samsung TVs are out there not really anything to do with Android they don’t support Android TV or even have Chromecast on them they use Samsung’s own software.