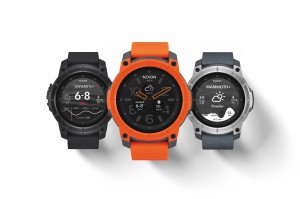 In March this year, watchmaker Nixon announced their first foray into the smart watch market with the rugged Mission watch running Android Wear. Pricing, an exact release date and even full specs haven’t been announced, but Nixon has now confirmed that they will be launching the watch here in Australia.

The Mission smartwatch was announced during the yearly Baselworld 2016 trade show in Basel, Switzerland, but there’s been very little announced since then. Nixon is showing the Mission on their Australian website now, and have confirmed plans to launch the watch here. In terms of availability, Nixon is talking about a ‘Fall’ launch, which is obviously a Spring launch here in Australia. Pricing wise? the only figure we’ve been able to narrow down is an approximate $400USD price tag, that equates to about $550AUD with our current exchange rate.

If you’re not familiar with the Nixon Mission, it’s being positioned as a ruggedised ‘sports’ watch. While no ‘IP’ rating has been given as yet, the watch is rated for 10-ATM (10 atmosphere) depth, which will let scuba divers take it to a depth of 100 metres. There’s also going to be pre-loaded sports focused apps – Surfline, Snocountry, and Trace – pre-loaded on the Mission.

For those of you who have your own sense of style, the Mission will be customisable. The base watch will feature a stainless steel bezel and silicon watch band, but will offer a choice of 20 bands and 15 bezels including Cerakote, stainless steel, gunmetal, gold and more.

The watch face will be a 1.39″ 400×400 resolution AMOLED display with Gorilla Glass, under the hood, the Mission will utilise the new Snapdragon 2100, 512MB of RAM, and 4GB of internal storage. The watch will also feature an array of sensors including a GPS, thermometer, altimeter, barometer, e-compass, gyro, accelerometer and humidity sensors. There will also be an ambient light sensor – but no flat tyre from the screenshots.

We’re currently talking to Nixon about their Australian release and we hope to have more information soon.

Hmmm, looking forward to seeing the prices of these.

Good to see some active android wear watches finally. Though really what I want is something with the features of a Garmin gps watch just running android wear.

Yes! I’ve been waiting a while for a smartwatch that I can wear while riding my mountain bike.

Finally, a water resistant smart watch. Looking forward to this.