Its that time of year once again for Sydney residents – the famous Vivid Sydney lights, music and ideas festival running until June 18.

Now in its 8th year Vivid Sydney has again expanded and its light shows are no longer just in the city but now also at Darling Harbour, the Walsh Bay Arts Precinct, Botanic Garden, The Rocks and also new locations Central Park and Taronga Zoo.

If you’re daunted by all the options for taking in the light shows and attending the events, the official Vivid Sydney app is for Android on Google Play and Apple’s App Store for iOS. It gives visitors and spectators the ability to get instant updates about crowd issues on transport or in certain areas along with show times, nearest displays via Google Maps along with information on speakers and topics.

This year, the app brings with it Vivid Trails, with itineraries for exploring different precincts and some suggested light walks and My Vivid, allowing you to save your favourite events, precincts and speakers. The information stored is synced across devices if you have a My Vivid account. 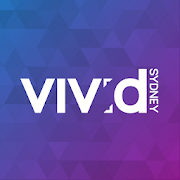