Home Mobiles Australian hands on with the world’s first consumer Tango phone – the... 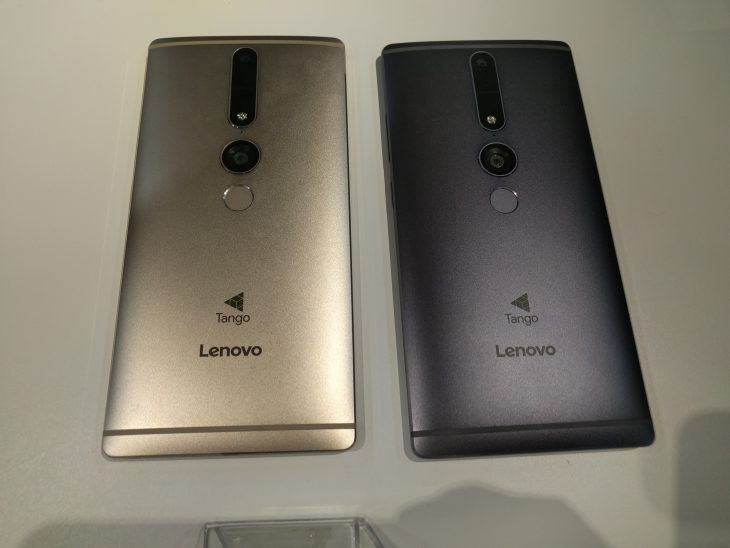 This morning, Google and Lenovo took the wraps of the worlds first Project Tango phone, announcing the Lenovo Phab2Pro. They dropped the Project, so it’s just a Tango phone now as you can see from the new logo on the rear of the phone. I’m here in San Francisco for the launch, so I grabbed some time with it and have some thoughts.

To start with the phone is massive. I put my Nexus 5X next to the phone and it dwarfs it both in length and width, as well as a little in thickness. But despite the large size, the Lenovo Phab2Pro doesn’t actually weigh that much even with a premium aluminium unibody. That aluminium body is a really nice one with a good grippy feel to it without being rough. But that size just makes it almost impossible to be considered really ‘pocketable’, though I would like to spend some extended time with it to see just how that goes.

The placement of the buttons was just about right, with a bit of an exception. The textured power button feels good and is at the right height. I would however prefer the volume rocker to be on the other side of the phone instead of having to reach up for it. I find having to move your thumb to change the volume can lead to ‘accidents’ and that’s not great but it’s purely a personal preference for that. The one major fail with the Phab2Pro is the name – it’s a mouthful. There are two other Phab2 phones announced with this phone, though they won’t be coming to Australia and they also don’t have any Tango inclusions, so we’ve let those fall by the wayside. But still, that name.

Moving onto the actual device, it’s actually really nice to use. Once you’ve got it sitting in your hand and you load up any of the Tango apps it was fast, fluid and really responded well. Johnny Lee and the Tango team have done really well with the Tango platform and Jeff Meredith from Lenovo and his team have done a great job with this phone. I was a little taken aback to find that the Phab2Pro is using a Snapdragon 652 processor, but you know what? With 4GB of RAM, you honestly can’t tell – it’s fast and it’s fluid.

Storage on the Phab2Pro is a pretty solid 64GB AND you get a microSD card slot to expand your storage as well. Lenovo have specced this thing out pretty highly to be honest, I’m impressed.

The cameras are an interesting thing. Despite the fact it has three on the back I actually didn’t sit trying to take sample photos with it. I saw one or two, but really it’s not the best conditions in a hands on place like this – rest assured we’ll take plenty in a review. The camera setup worked really well on the Tango side of things, which is obviously where it counts so I`m happy basically…at least for now. The sound on the phone was pretty decent, with Lenovo bringing Dolby in to include Dolby Atmos on the phone which means great sound. We took a visit to the Dolby labs here in San Francisco and their Atmos on mobile is impressive. Lenovo has been using Dolby Atmos in their Yoga 3 tablets and the Phab2Pro uses it quite well. The Phab2Pro unlike the Moto Z which got announced today definitely does have a 3.5mm jack – plug in some nice headphones, or even some basic ones and you do get good sound surprisingly you can tell the difference but Dolby did something good with this thing.

The big surprise was a new audio capture in the 5.1 Audio Capture – but unfortunately in a noisy environment trying to capture decent audio that wasn’t blown out was impossible so I’ll have to wait to pass judgement.

In terms of how well the phone will do in the market it comes down to availability and price. Lenovo Australia is still talking to their retail and carrier partners here to secure a release. The team are really excited to bring it to Australia, so we believe them when they say they want to push for a launch here. It’s big and it has a bit of a silly name, but I really liked the Phab2Pro, I can’t wait to spend some more time with it.

Anyone know where this ended up? Summer has come and gone but no phone.

Technically they have until September 23 for summer in the USA. Behind the scenes, rest assured I’m following up on this to the point of being annoying. I too want this Tech so I’ll be following up about the launch more.