It’s been a long road since Google announced their Project Tango platform, a system that would allow mobile devices to map their position in the physical world using cameras and an array of high-end sensors built-in, back in 2014. At Lenovo Tech World today, Lenovo has announced the world’s first consumer-level Project Tango phone, known as the Phab2Pro.

The phone is one of three Phab2 devices being launched at Lenovo Tech World, with the Phab2Pro the only Project Tango device in the Phab2 line. The Phab2 and Phab2 Plus are the other models that Lenovo has announced, though they won’t be launching in Australia and though decent phones in their own right, it’s the Project Tango aspect of the Phab2Pro that really shines at this launch.

In a world which is very much focused on both Augmented and Virtual Reality technology, the choice of building the world’s first Project Tango phone was made after a look at how other manufacturers were dealing with the ideas around Virtual Reality. Instead of building another headset to add to a growing market, Lenovo decided to build a phone which would incorporate Project Tango technology, allowing consumers to use the Augmented Reality functions without extra equipment.

Hardware, or the phone itself

To start with the Phab2Pro is a big phone, but it’s also a premium phone with a metal unibody design, loads of RAM, storage, Dolby sound and a fast custom processor to boot.

The Phab2Pro has a 6.4″ display and it’s a combination of things that account for that size. The original Project Tango device is a 7″ tablet and the decision to scale the platform down to a phone presented some interesting challenges for the Lenovo engineering team. To create the Phab2Pro, the Lenovo engineering team worked with with Infineon and PMD on 3D camera technology as well as Qualcomm for the processor and of course Google on Tango to create the Phab2Pro.

The camera modules, of which there are three required for Tango – a main camera, as well as depth sensing camera with an IR emitter and receiver and motion tracking cameras – fit into a specially engineered split circuit board in a vertical line that mounts all the required cameras in the top third of the phone. 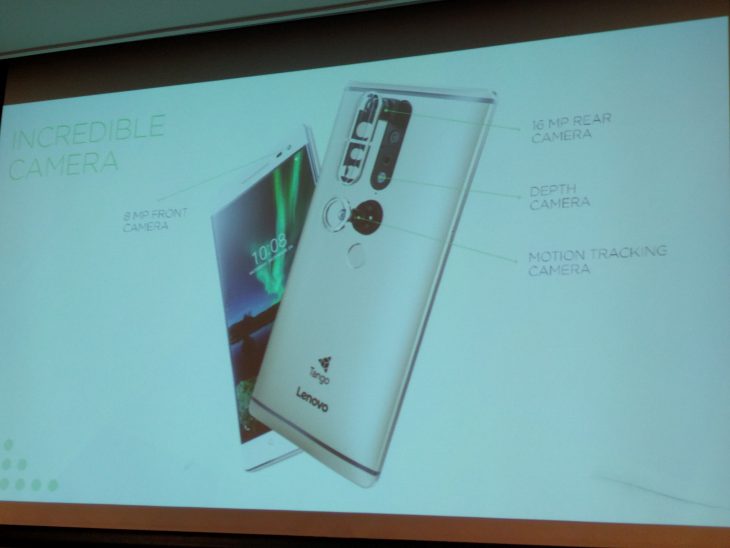 As well as three cameras, Project Tango requires extra sensors, all of which have to work together with high degrees of accuracy; indeed Project Tango captures over 250,000 pieces of data per second, with the data from all the components required to be timestamped to within 50 microseconds to accurately map the devices position in space.

All this processing required close partnership with Qualcomm, who supplied a specially-built for Tango version of the Snapdragon 652, that includes a DSP, ISP for the cameras and an integrated sensor hub.

The Phab2Pro includes a top of the line sound system as well, with Lenovo bringing their existing partnership with Dolby to bear on the Phab2Pro. Like their Yoga line of tablets, the Phab2Pro will include Dolby Atmos sound, which will give users an immersive, high quality sound through both the speakers and the headphones. Dolby and Lenovo are also using the launch of the Phab2Pro to launch a new feature for mobile for audio capture. Called Dolby Audio Capture 5.1 the phone includes a Triple Array Microphone setup with Active Noise-Cancellation to capture high quality true to life audio.

Battery life on the over 4,000mAh battery includes up to 15 hours of battery life and offers 2.4x fast charging to make sure you can top up fast when you need to.

Like a lot of phones these days, security is paramount and a rear mounted fingerprint sensor is included on the Phab2Pro, which will take advantage of the fingerprint technology in Android 6.0 which the phone will ship with.

So, brass tacks time, the Phab2Pro has a lot of hardware which includes:

With no headset or additional hardware, the Phab2Pro using Project Tango, allows a user to integrate the possibilities of the platform into everyday life, with the technology disappearing and the functions and benefits of Tango remaining to enrich users lives.

From the moment we saw Tango, we knew it could become pervasive, just like GPS. However, to truly make the Phab2Pro a game-changer, we developed it at an affordable price for mainstream consumers, delivering not just a bleeding-edge phone, but an all-around fantastic phone that’s first to market.

Software, or how it works

At launch, there will be an array of Tango enabled apps available in Google Play. Mr Meredith estimated there were around 50 compelling apps for Tango which he said the company expects would double over the coming 6 months, with Google’s demonstration at I/O of the Project Tango platform exciting and incentivising Android developers to work on adding Tango functionality to their apps.

A number of big name players are on board with Project Tango building applications for the platform. US retailer Lowes has built an app which will let you drop appliances and other items into your home, letting you shop virtually with confidence of how an object will literally look in your home before you buy it. Other partners include Schell Games who make a great looking domino game, Wayfair who have created 3D models of their goods to place them in your home as well as other partners. There’s other simple apps such as Project Tango Measure It, which was one of the first Tango apps to launch in Google Play that lets you measure spaces relatively accurately with a Tango device:

Project Tango is even capable of basic 3D modelling, letting you quickly scan objects or even a whole room simply by letting the cameras on the phone and an app see it. You can also export those 3D models as files that can be imported into 3D modelling software.

Lenovo will be launching the Phab2Pro globally, as the first ever globally-released Lenovo phone in September.

The phone will go on-sale in the US through retailer Lowe’s and Lenovo.com with a retail price of $499USD, with the company still working on carrier deals. This is also true in Australia, with no carrier or retail availability to announce. Lenovo Australia has confirmed though that they are trying to get the phone to Australia.

If you want to check out more on the Phab2Pro Lenovo will be launching a mini-site at lenovo.com/Tango

We’re going hands on with the Phab2Pro shortly so stay tuned.