At their Tech World keynote in San Francisco Lenovo announced some cool new products in the world’s first Tango phone as well as the Moto Z and the Mods. But during the demonstration, Lenovo CTO Peter Hotrensius showed off a foldable tablet, as well as a watch like device with the help of YouTube star Meghan McCarthy. While they aren’t ready to let people play with the devices just yet, they did have them on display and we took a closer look. 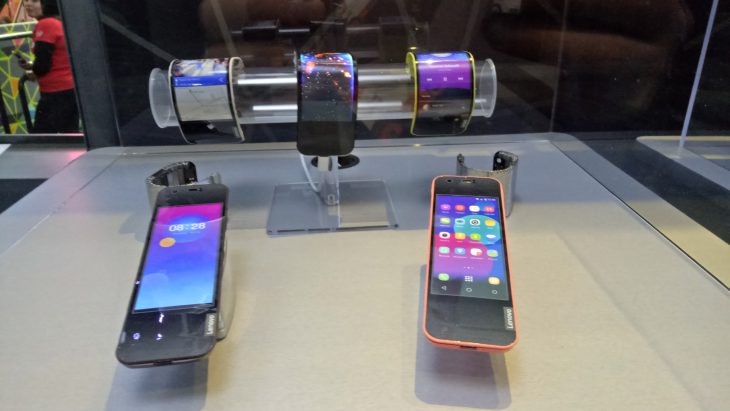 The CPlus is a concept device that is a thinner, yet long device running Android, that can operate flat like a phone, or wrap around your wrist when you want to work out or even just store it.

The CPlus has 2 curves to match all the various wrist types out there and these curves obviously mean some interesting engineering challenges have been overcome. The CPlus incudes a flexible PCB under the 4.35” flexible display and a full ‘eskeleton body with self-lock support.

Surprisingly though it’s not ready for sale it’s got 12 colour choices, making it just that little bit cooler to think about. Just in case you thought those were static images, I took a really quick video that shows it was actually a live screen. The Folio is another foldable concept device, though this time a little more advanced in scope than the CPlus in that the screen bends completely back on itself.

The Folio is designed to give you the option of a smartphone with a 5.5″ display or a tablet with a 7.8” display with a flexible diplay resolution of 1920×1440. The tablet/phone can be folded to any angle so it can sit in a ‘Tent’ mode like other Yoga products in the Lenovo line with a split screen if needed, or operate as a smartphone with a dual-display.

Like the CPlus, the Folio runs Android with full compatibility with apps, though some customisation for the split-screen windowing would be required.

The main problem engineering wise with the Folio is that screen. Lenovo says that they would be aiming for a display that could fold up to 200,000 times without wearing out the pixels in the crease before even looking at a consumer release. Though even with that high standard a 2018 release could be possible they said. To get ready for that, like the CPlus the Folio actually has five colour choices – not bad for a product they aren’t even selling yet.

Like the CPlus, if you don’t believe this is a live screen, here’s a quick video:

Lenovo Concepts
These really are concept devices at the moment, though Lenovo said they wanted to show them off so they can get devices like these into the hands of testers so they can get a real product going. It’s this sort of innovation that keeps Lenovo moving forward.

It’s an interesting point to note, that Lenovo was quick to say that the screen technology wasn’t theirs (and they wouldn’t say who actually made them), they aren’t a screen manufacturer, but the other engineering challenges and the ways they have built around them are theirs. Basically it was just cool stuff at this stage, but it’s coming, so here’s just a brief taste of what you may see soon from Lenovo.

I think it’s very cool that technology is moving on like this but neither of these devices appeal to me particularly.

What’s with the 360p video and dodgy image quality?

Not sure why the videos are 360p only, though I know Dan was preparing and uploading these on the go, so probably not wanting to use a heap of bandwidth. Photos were taken on mobiles, not DSLRs.