Lenovo’s new Moto Z smartphone’s array of Mods’ introduced at Lenovo Tech World last week have been the subject of much discussion, regarding functionality and pricing. The function is there, but whether the pricing matches that function is the question. A leak from US carrier Verizon through their app has shown off the pricing for the Mods and they’re surprisingly expensive. The JBL powered Soundboost speaker mod will be slightly better priced at $79.99USD, adding a pair of 27mm 3W speakers with a kick stand to the back of your phone when you want to play some music, or share a video with friends. Again, you can get a set of speakers for less than this price, so you’re paying a premium for the convenience of a custom fit speaker system for your phone – still, they do snap on nicely and play fairly loud. 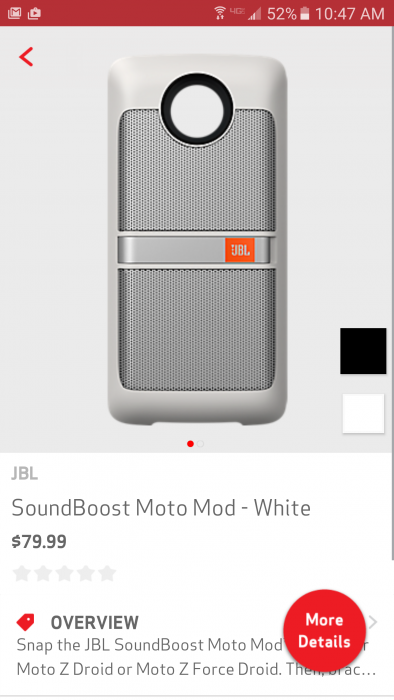 Lastly, those power pack mods, available in different sizes and styles, including one from fashion designer Kate Spade are going to start at $69.99USD and range up to $99.99USD for the wireless charging mod. The power pack mod makes the most usable sense of the three Mods so far announced – a camera mod in partnership with a well known camera brand is coming soon – so this is where it gets interesting. A decently sized power bank will cost around $20 here in Australia, so whether the convenience of adding a power pack to your phone is worth the cost is the question.

Once US to AU price conversion is done, GST is added, a little margin and some other factors are priced in the prices will obviously be a little more. Moto PR isn’t commenting in the US, and we’re going to be waiting till September for the global launch of the Moto Z so we’ll find out what pricing they’ll be looking at then.

A decently sized power bank might cost $20, but one similar to the motorola effort is less than $10 from aliexpress; similarly thin and phone shaped. AU$105+ for their effort isn’t just a bit more expensive – it’s a lot.

It seems all these ‘modules’ from different manufacturers are just an excuse to screw the punter for more proprietary cash. You can bet that making a 3rd party item requires a licence agreement and a wad of cash for each sale.