What’s a Wednesday without a new app and game discount, this week it’s Puddle + and YoWindow Weather dropped to just 20c each. YoWindow Weather
For an app this week, Google has again chosen to pick another weather app for their Deal of the Week.

YoWindow as a weather app is a different take than you’ve probably seen previously, reflecting the weather on the screen – if it’s raining outside, the app shows rain, if it’s sunset/sunrise then you’ll see that in the app. YoWindow animations are also shown as you scroll through the day, you can swipe forward in time and see the animations coming up as you fast forward through the day, or look several days ahead.

Unfortunately you won’t find weather data from the Bureau of Meteorology in YoWindow, instead you’ll get it from yr.no and the National Weather Service (NWS) so you can expect to get some not exactly right data. Still it sure looks pretty.

If you’re on the lookout for a new weather app, head over to Google Play and see what you think of YoWindow, at just 20c it’s a pretty decent looking app. Puddle +
Gamers, especially Android TV gamers are getting some good deals of late with the Game Deal of the Week, and this week Puddle + looks to be no different.

Puddle + is a liquid physics puzzle game with ‘enhanced graphics and new videos’. Essentially your aim in Puddle + is to get a puddle of fluid – it can be a number of different types of liquid (water, oil, nitroglycerin, molten lava…) through a number of different environments and avoiding obstacles such as burning passageways, carnivorous plants and electric currents and dammit, it looks gorgeous.

Unlike a number of games, there’s no extras in Puddle +, no Ads or In-App Purchases to side track you…and dammit, just look at it:

Head over to Google Play and check out Puddle + right now. 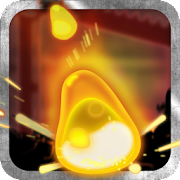 With no BOM support, YoWindow is a little out for most people making Puddle + the best choice this week. With Android TV support it’s just a great choice.

And, as usual you can still get last weeks deals of the week Aqualert:Water Tracker Premium and Beyond Ynth HD for just 20c – but you may need to hurry up. Grab them while you still can.