As the preferred messaging app of choice for the Ausdroid team, Telegram offers quite a few functions that others don’t and they’re constantly adding more. Today Telegram has launched a bunch of new features in their web and Android apps including Drafts, a new internal video player, an unread message counter and the option to view profile picture history.

To start with, we all have busy lives and you often start a thought but get interrupted while in a chat, with Telegram 3.10 you can actually easily see those thoughts from the list of chats. Any chat you’ve started typing in will now show the word ‘Draft’ in red with a preview of the message you’ve started typing. A highlight for Android users specifically in version 3.10 of Telegram is the new video player that’s been included. You can share videos in Telegram directly now instead of opening an external player, an internal play pops up to play the video directly in the app. The video player is only available for devices running Android 4.1+, but given that as of this month that’s 96% of devices it’s a good amount of coverage. In version 3.10 there’s also a new option to view a group’s profile picture history instead of just the current one, and finally on Android and on the desktop you also get the ‘Scroll to bottom’ button with an unread message counter. 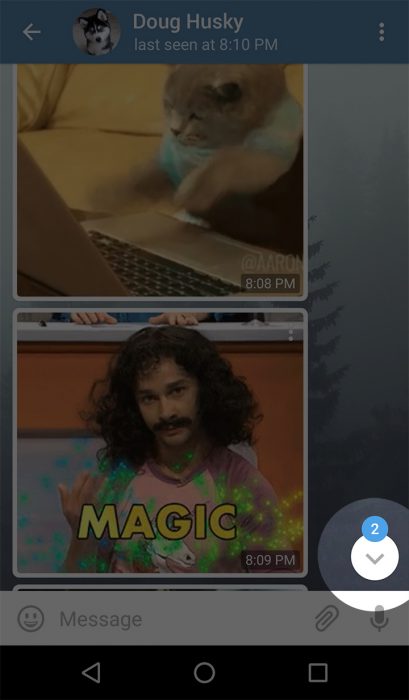 Telegram also advises they’ve been working on the look of Telegram across their apps, specifically calling out improvements on the desktop which includes ‘Telegram Desktop now sports nifty blue unread message counters, new buttons, and fully revamped profile pages’. If you’re a Telegram user, you’ll probably have already gotten the update on your device already as it’s quickly rolling out now. If you’re not seeing any of these features you should head over to Google Play and check on updates now.