Chrome OS fans patiently awaiting the arrival of Google Play are today going to get a bit excited with owners of the Asus Chromebook Flip today seeing an update to the M53 version of the Dev channel, which also brings the Google Play store and of course Android apps on Chrome OS.

When Google announced that they would be bringing Google Play to Chrome OS at their developer conference last month, three devices were announced as test devices for the release, the Asus Chromebook Flip, Acer’s convertible R11 and of course Google’s own Chromebook Pixel 2015. The setting is apparently showing up without any flags being set or settings being changed. 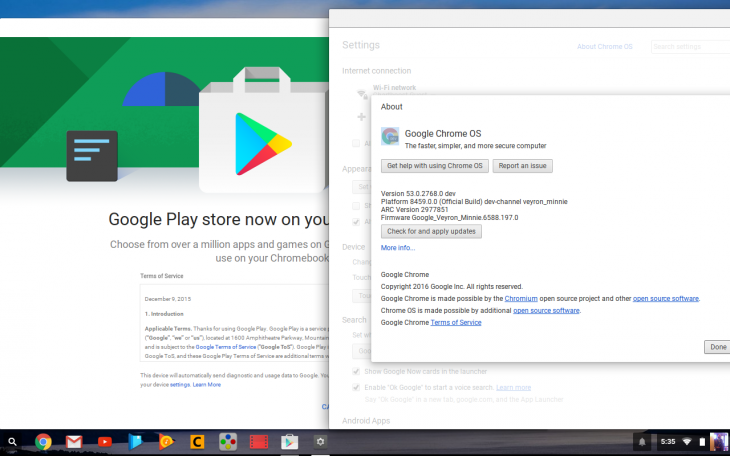 According to users on reddit, as well as sadly checking my own Chromebook Pixel 2015, it seems the Asus device is the only one with Google Play active – though M53 is now installed on the devices.

The experience of using Android apps on Chrome OS seems to be fairly hit and miss with some users reporting some games are not quite ready to rock with one user attempting to use Real Racing 3 finding the accelerometer not quite responding correctly to the ’tilt left’ command. How Chromebooks without a touchscreen handle Android apps on Google Play we’ll find out about when Google extends this feature to more models later in the year.

Also according to comments, the Chromebook is running Android version 6.0.1 with the agent identifying the device as a tablet.

The Asus Chromebook Flip and the Acer R11 Chromebook are both available for purchase here in Australia, though they’re still fairly hard to get a hold of. JB Hifi is still ordering devices in on a case-by-case basis so you can still order these two models. Sadly, the Chromebook Pixel 2015 is very much only available in the UK and the US.

I`m looking forward to checking out Android apps on Chrome OS, but I am just quite surprised that the Chromebook Pixel isn’t the first in line for this function.

I’m thinking of replacing my chromebook with the chromebook flip so I can have access to the playstore. For someone who is not tech savvy, can someone give me an ‘idiot’s guide’ to how to get the playstore on my chromebook? The article mentions M53 version of the Dev channel. Whats the process to setting this up. Cheers

anyone else having an issue with the android apps not recognising the SD card?

Anyone know how much JB are selling it for, and if they can order the one with 4GB RAM and 32GB Storage?

When this was announced was looking at getting a Flip but sounds like there could/will be new models available very soon so will probably wait and see what is announced at the time this goes commercial.

My Pixel 2 LS just received the M53 build but, as with the others, no Play Store. 🙁