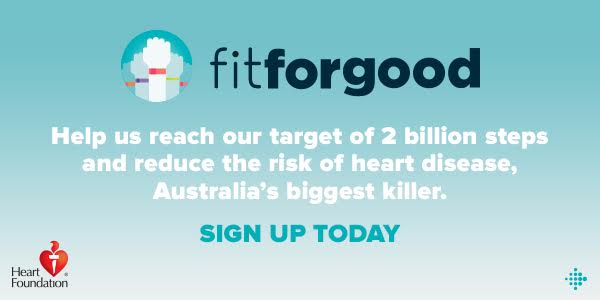 Fitbit Australia has today announced a new campaign, called FitForGood, which hopes to get Australians moving, with the goal of hitting 2 billion steps from registered users. The campaign will, after that goal has been hit, donate $100K to The Heart Foundation.

It’s pretty simple, the challenge is to sign up as many users as possible to walk more. The steps will be counted between the 11th and 25th of July, but can only be accumulated by people with a Fitbit account – and a Fitbit device. Users sign up for FitforGood at the Australian sign-up page and when they sync their steps through the app, they will be counted towards the goal.

The campaign, as well as raising money is aimed at promoting heart health. The Heart Foundation’s Chief Medical Advisor. Professor Jennings points to new research which says that simply increasing your daily number of steps can reduce your risk of mortality. The FitForGood campaign will raise fitness levels as well as posisibly raise more money for The Heart Foundation is great incentive says Professor Jennings:

FitForGood helps encourage physical activity and supports our critical work to reduce the risk of heart disease for all Australians. Even doing an additional 2,000 steps a day can reduce your risk of having a heart attack as well as key risk factors – including high blood pressure, high cholesterol, diabetes and obesity.

The FitForGood campaign is using the possibility of donating the money to The Heart Foundation, as well as getting more physically active, as the incentive itself – i.e there’s no prizes to be given away. If the 2 billion step mark isn’t reached, Fitbit Australia will instead donate a pro-rata amount based on the number of steps logged.

The campaign is also encouraging people to get their friends and family involved and donate to support them, trying to raise an additional $400,000 for The Heart Foundation.

If you’re a Fitbit user, you can sign up now.