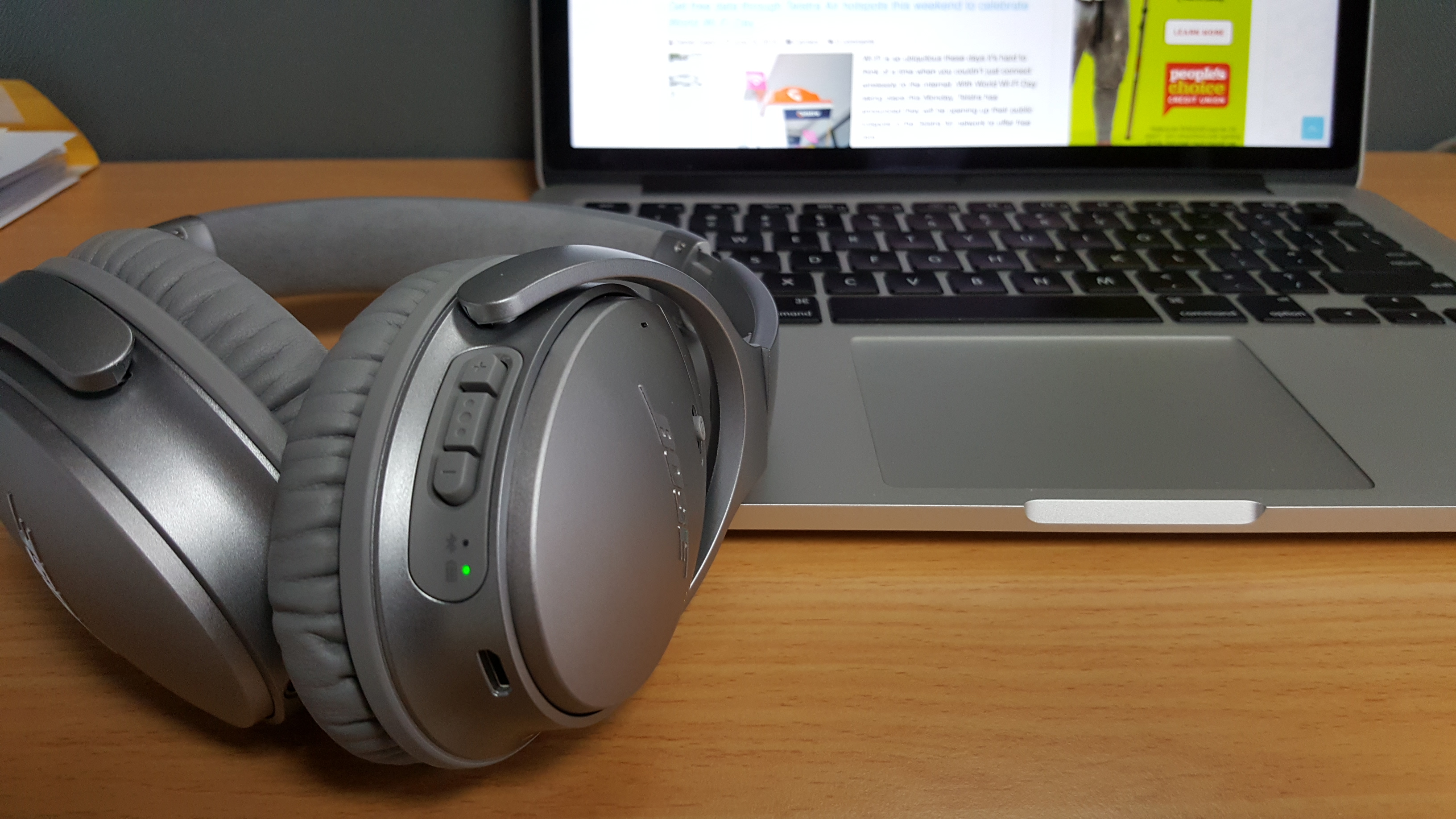 We’ve recently been lucky enough to review a couple of outstanding offerings from two of the biggest names in consumer audio — Bose and Sony. I reviewed the Bose QC35 Bluetooth headphones and Chris reviewed the Sony H.ear On Bluetooth set. Both are really impressive units with their pros and cons, so we thought it might be interesting to swap them over and do a bit of a showdown between the two.

In many ways, the two devices are very similar:

However, there are some fairly stark differences, too:

Phil’s take on the QC35 vs Sony H.ear On

The Bose headphones are significantly more comfortable for my use. They’re a bit lighter, and the Sony are tighter on my head. I found the ear padding on the Bose a touch softer. Essentially a few minor differences between the two made for a more comfortable listening experience over long periods of time.

The sound from both is genuinely outstanding but there (again) are a couple of minor differences in this case that put the Sony option ahead by a nose. The sound quality of both units is really high, so high in fact that I would fairly confidently say that you’re not going to get better without spending significantly more money and requiring a desktop amplifier to drive them. For me, though, the clinchers was the ability of the Sony H.Ear On to disable the noise cancelling wirelessly where the Bose needs to be hard wired to disable this and Sony having the HD Audio capability.

Many users won’t have Hi Def encoded audio files, but if you do you’ll hear the difference fairly clearly. That being said my experience was that if you like really bass heavy music, you’re probably going to prefer the Bose.

While it’s a really close run thing, and based on sound alone the Sony H.Ear on would get the win – if I were shelling out $500 for one of these two my money would go on the Bose. The comfort factor for me personally was a big enough difference. I also really like the look of them and I found the packaging a bit more appealing. On comparing the two, Chris had this to say:

Sony’s H.Ear On Wireless NC are some next level headphones, to be sure. The sound quality is extremely high, and while the volume didn’t go as loud as some other headphones, I felt this delivered an enjoyable experience; sound was more accurately reproduced, rather than just enhanced to make your brain rattle in your skull. The multitude of controls was welcome, though you had to pay a bit of attention to remember which button did what; it was much easier to turn off noise cancellation by accident, rather than turning the headphones off.

A point of difference was the noise cancellation; Sony’s H.Ear On range allows you to turn this off, and sometimes this might be welcome: for example, where there isn’t a lot of background noise and you don’t want NC interfering with your sound.

Bose QC35s, however, do not allow you to turn NC off; if the headphones are on, so is the noise cancellation. Bose makes up for this with a fairly minimal distortion from having NC turned on, so in many cases, you probably wouldn’t notice but it can kill your battery a bit faster. Of course, if you don’t want the NC on, you can use the cable connection instead of BT. If you do this, the QC35s work basically like the QC25 model they replaced; power off with cable connected is just normal audio, and if you turn the power on, NC is enabled. You can’t have wireless with noise cancellation off though, so bear this in mind.

In terms of comfort, I honestly found both headphones to be about the same. Both have large over-ear cups, with the bose looking slightly more refined (with a smooth, rounded look) as opposed to Sony’s slightly more pronounced lines. Neither headphones were especially comfortable worn around the neck (as you might do if you took them off to talk to someone for a while), but those with a more slender neck might not find this.

Sony’s H.ear On probably edges ahead because it has one feature the Bose QC35 model doesn’t; support for Hi Def audio, supporting the industry standard when used over a cable connection, and Sony’s proprietary wireless LDAC protocol when used with a compatible Sony device.

My trashed ears might not tell the difference between Hi Def and normal audio so easily, but if yours do, and you have audio encoded in high quality, you might appreciate this difference.

If my money were on the line, my choice might come down to something very superficial; I prefer the way the QC35s fold flat, rather than Sony’s fold-sideways style. The fact remains that if you’re going to spend $500 of your hard earned cash on a pair of cans you really need to check them out for yourself to ensure that you are absolutely certain they’re right for you.

You might struggle to find both units in the same store to try out side by side, but the Bose QC35 can be readily tried in many JB HiFi stores, and Sony’s H.ear On can be tried out in Sony stores and some other authorised retailers (though they don’t seem to be in JB yet).

Much of what we’ve said here is based on our experiences and preferences but we hope that anyone looking to purchase some really high end headphones now has some guidance from us and can make a better, more informed decision.

bought the Sony’s, haven’t looked back. After using both – my gf has the Bose QC35 – i can safely say that the Sony’s are better, in my opinion. The ability to turn off the noise cancelling is so handy, especially on a windy day, and the sound quality is just better in every way, whether wired, turned on, turned off, nc on or off… the sony stands above the bose. Again, that’s my personal opinion, but my thoughts more or less mirror what these reviews have said, except that I chose the Sony’s 🙂

This. Love my UE 9000 sound quality and nothing compares. Want to compare with the Sennheisers which seem to be incredibly costly…

Just bought a qc35 this week and I totally agree with Phil. I think qc35 is the most comfortable on ear headphones i have ever tried.

I have had a go of them, a work colleague owns a pair. My short review: most comfortable, best noise cancellation, best call quality. Highs are pretty good, but I feel the lows are muddy compared to my UE9000. I love my UEs, but I cracked the head band and am seeking a replacement. Don’t think I could live with the Bose on sound quality 🙁