Home News and Editorial Linksys wants to eliminate network blackspots in your home with its new... Linksys is making a play for your home network today with three new next-generation Wireless AC Wi-Fi networking products under the “Max-Stream” name.

The company’s new products are the EA9500 tri-band gigabit router that runs the show, the RE7000 range extender to ensure it reaches everywhere in the house and the WUSB6100M USB network adapter that gets older computers onto the higher speed networks.

As the name suggests, Linksys’ Max-Stream range is all about getting media streaming to all the devices in the house, to the fullest potential of your internet connection. For many Australians, pushing that much data around can overload the router and lead to network slowdowns. At a time when everyone in your house might be carrying a laptop, a phone and a tablet — and maybe a work phone, and a smart watch with wifi, and maybe more — your Wi-fi router needs to be able to handle the concurrent device capacity of all those devices. And your visitors.

Linksys wants these products to be ready to alleviate those concerns and to future-proof your home network for a long time to come by providing the latest wireless AC technology along with multi-user MIMO (MU-MIMO) to allow devices access to network resources and a better, stronger signal. The EA9500 router uses multi-user MIMO technology to provide fast Wi-fi speeds to all devices in the house at the same time, instead of dividing its attention amongst them all. It’s a tri-band router so there’s three distinct network bands (one at 2.4 GHz and two at GHz) that can allow important devices to access network bandwidth instead of fighting for bandwidth with other users who might be streaming video from the Internet. It’s also got eight gigabit ethernet ports at the back, along with a USB 2 and a USB 3 port.

You can run an older-style 2.4 GHz network, a 5 GHz network and guest networks on each of those bands from a single EA9500.

One of the router’s party pieces is its membership in the Linksys Smart Wi-Fi ecosystem. Smart Wi-Fi is an app you can download on your Android device, connect it to your router and get access to preferences you can tweak on the go like parental controls, prioritisation, guest access and more. Linksys also operates a network connectivity troubleshooting service through the app, allowing you to receive notifications when the router is offline and see if there’s anything you can do to address the problem.

With its eight(!) antennas, the EA9500 also provides a super strong Wi-fi signal that will be seen by more devices in your house. To test this out, I removed my Apple Airport Extreme – which provided a good network signal in all but the farthest bedroom in my house – and replaced it with the EA9500. The result was a moderate strength Wi-fi signal where there previously was none. It’s worth noting however that even the most notorious backspot in my house couldn’t be fixed by the EA9500. That calls for a range extender. 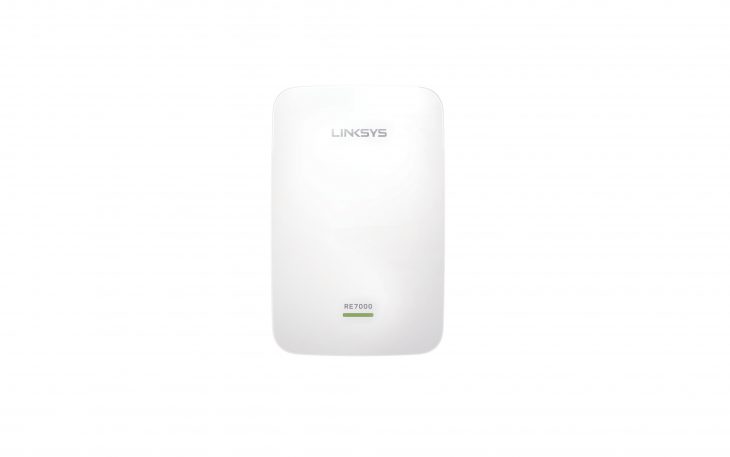 If you’re having trouble getting a network connection to all the farthest corners of your house, Linksys’ RE7000 range extender is designed to help.

The Spot Finder tech is important. Linksys says they’ve found that many people place range extenders in the wrong place – where there’s no Wi-fi signal to extend – and then complain that it’s not working. With a simple colour code on screen in an Android app the RE7000 can tell you where it’s best placed.

The other big feature offered by the RE7000 is seamless roaming – when you’re using compatible products. Your device can move between the main Wi-fi access point and the range extender without knowing its done so, and without you needing to manually switch networks.

Because of my networking issues, I’d taken to running two wifi networks in my house – that’s no longer needed because the range extender covers the blackspot quite nicely. The final piece of Linksys’ Max-Stream trifecta is the diminutive USB adapter, catchily named WUSB6100M (say it with me, everyone … what, nobody said it with me??).

This adapter uses any USB 2.0 or above port and lets your computer connect to the superfast new AC protocol in use on the router and range extender products.

Regrettably, its only designed to work on Windows computers and laptops running Windows 7 and above so it’s remained in its box in my house (the only options are a Mac Mini and a MacBook Air).

That’s alright, though – Linksys is really intending these guys to go into the workforce where businesses might want to outfit a range of older PCs with new wifi abilities by purchasing the new router and adding the USB adapters to their existing devices. They will of course also bring whatever Windows laptop or desktop you might have at home screaming into the new age of superfast AC Wi-fi.

Linksys’ new MaxStream products are coming to JB Hi-fi and other retailers, starting today. The router runs $550, while the range extender is $200 and the USB adapter $60.

I used to have two different wifi networks running, one from an extender-type device. Then I realised you just need to set them both up with the same SSID and you no longer have to choose one or the other depending on where you are in the house. Not sure if this seamlessly roams from one to the other or not, but it seems to work well.