It’s been a little while since we’ve seen a new Motorola handset in Australia; the last major entries into the Australian market were about twelve months ago now, in the form of the Moto G (3rd Gen), followed closely by the Moto X Play and X Style. These were all fairly impressive handsets, and in what’s become a bit of a trend for Motorola, they were fairly well priced, too.

Motorola took, we would say, a bit of a misstep last year with the exclusivity around the Moto X range, but that won’t be repeated this year, with Motorola selling everything through retail channels and direct to customers online.

The Moto G4 Plus is the first handset to be released here under this new arrangement, and it went on sale this week from $399 for the 16GB variant, and just $449 for the 32GB model. We’ve been taking a look at one, and here’s the low down.

What does it offer?

The Moto G4 Plus is what we would call a super-mid-range handset; it’s priced below $500, and yet offers fairly competitive features. On the front is a 5.5-inch 1080p screen, with a Snapdragon 617 processor supported by 2GB or 3GB RAM, and 16GB or 32GB storage. Android 6.0.1 is inside, and a capable 16Mp camera is on the back.

As you may suspect, the Moto G4 Plus sits above the standard Moto G4, which is basically the same phone with a slightly less capable camera. There’s also the G4 Play, a significantly cheaper handset with quite a bit less power aimed squarely at the budget market.

There are some surprise inclusions for a super-mid, including a front-mounted fingerprint sensor which appears just below the main screen. It’s surprisingly quick, but the positioning is more than a little awkward. There are some curious omissions though, including the lack of NFC which is — given today’s launch of Android Pay — a bit disappointing.

Like the Moto G before it, the Moto G4 Plus is mostly of plastic construction, but don’t let that fool you; it doesn’t feel cheap or nasty, with a solid glass front definitely contributing to that premium feel. The fingerprint sensor is the only thing breaking up the front of the device, with its square shape featuring a slim outline to allow it to be easily felt. Physically, the Moto G4 Plus isn’t exactly small; it’s ever so slightly wider, taller and thicker than the LG G5 (to give you some comparison), and its size isn’t much different to the Samsung Galaxy Note 5.

The right side of the phone features the volume rocker and power button above it, with all in a very natural position. A Micro USB port (boo, USB-C is better!) is on the bottom, and a 3.5mm audio jack up top. That’s about it. On the rear of the G4 Plus is the 16MP camera lens, laser emitter (for enhanced auto-focus) and dual-tone flash, above a signature Motorola logo in the centre of the rear case. The rear case is removable (and interchangeable) but the battery is not. Taking the rear case off is required to access the MicroSD slot and SIM tray, and the latter is a bit clever; it takes both a microSIM or a nanoSIM (with the use of a supplied adaptor tray) … and it takes TWO of them, not just the one — while the primary SIM supports 4G, the second supports 3G, in preparation for the 2G shutdown later this year. 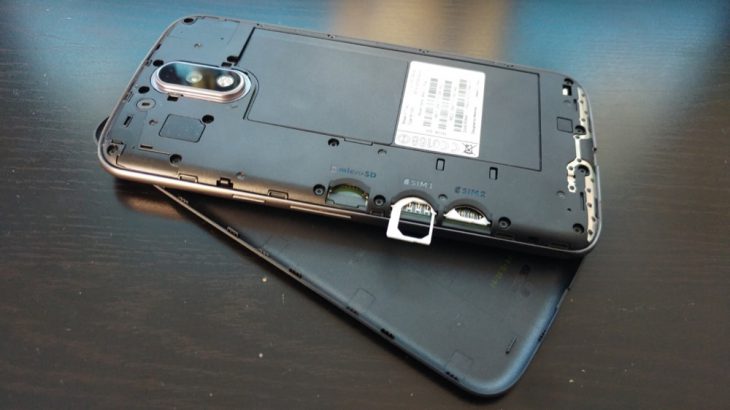 The Moto G4 Plus display rates well; it’s crisp and vibrant and as good as it is, an AMOLED display would go better here; viewing it in bright daylight isn’t great, and equally in the dark it can be a touch too bright. The Full HD resolution is good, but not QuadHD. For most things, it’s just fine.

The fingerprint sensor is surprisingly quick, bringing the phone very quickly to life, and its inclusion in a mid-range phone is a great thing.

The Moto G4 Plus camera is rather good. Using a hybrid auto-focus with phase-detection and laser focus means that it gets it right almost all the time, whether it’s bright, dark, or anywhere in between. The inclusion of a pro-mode is also rather cool, allowing users to tweak everything from ISO to white balance with ease.

Like most mobile cameras, the automatic settings usually do the best job, but for those who know how to handle manual settings on a camera, those functions can allow some greater fine-grained control. We’ve spoken quite a lot before about the Moto camera interface (see my review of last year’s Moto G 3rd Gen), and this year’s camera isn’t significantly different.

Performance, too, is fairly good across the board, though low-light situations do tend to be handled less well. Optical Image Stabilisation can make a big difference in mobile cameras (and DSLRs, too) and the lack of OIS here is something to note, though it doesn’t really let the Moto G4 Plus down too much.

After the hair was did

Software performance is equally impressive; the Qualcomm Snapdragon 617 isn’t the most powerful processor, but with eight cores (4 x 1.5 GHz and 4 x 1.2 GHz) it’s rather capable when paired with a 550 MHz Adreno 405 GPU. We didn’t really experience any slow-down or stutter with the G4 Plus in our flicking through various apps and using the operating system. In fact, this might be one of the more responsive mid-range phones we’ve used.

Our phone is the 2GB RAM / 16GB storage model, so if you shell out the extra fifty dollars for the 3GB / 32GB model, you can prepare to be even more impressed with the running of the phone.

Probably the only hiccup on performance comes with more intensive apps and games, where there can be both a bit of slowdown and also a bit of warming up. In this area of the market, we don’t care too much about benchmarks, but it’s worth noting that the Moto G4 Plus performs better than the Nexus 5X (a firm competitor).

Battery life is fine, too, with the 3,000 mAh battery powering the phone capably through a day even under reasonable demands. The average user who doesn’t play Pokémon Go could well find two days of usage under the covers. It’s worth noting, too, that Motorola includes a TurboCharger in the box which can deliver up to six hours of power in just 15 minutes on the charger.

The inclusion of a fingerprint sensor, as admirable as it is, isn’t perfect. The downside is the location; located on the front of the phone at the bottom, it’s a little awkward, and I’ve become rather accustomed to rear mounted readers which are simply more intuitive to use. For anyone used to a Samsung or Apple design, though, this will be second nature. The other factor — not really a disappointment, just something to note — is that it is just a fingerprint reader; it doesn’t operate as a home key like Samsung or Apple have.

The Moto G4 Plus is brilliant for the price, but if you spend a little more, you can significantly improve your mobile camera performance; OIS is included in phones that don’t cost too much more, as are cameras with larger pixels that perform better in low light. Last year’s LG G4 has a better camera with OIS, manual controls, and great performance and offers flagship features for roughly the same cost as this year’s Moto G4 Plus (though of course, that phone lacks a fingerprint sensor). We include this just for a comparison point.

Neither of the Moto G4 Plus cameras has a particularly fast aperture; f/2.0 on the rear and f/2.2 on the front are squarely middle of the road, but for most people, this really doesn’t matter. A faster aperture helps in low light, and can help capture motion shots a little better, but the G4 Plus does the job.

These sound like negatives, and if we’re being honest, they are, but one must peg one’s expectations; the Moto G4 Plus, at well under $500, has the one of the best cameras on a budget/mid-range Android phone. Try it yourself, and you’ll probably agree.

As a super-mid, the Moto G4 Plus blends the best of high-end phones and their features with a budget cost, and that can be quite difficult to get right.

We’re seeing — and are glad to be seeing — an increased focus on the middle market; flagship phones are too expensive for many, and budget phones are becoming increasingly more powerful and affordable. A $100 phone today is the equivalent of a flagship from a couple of years ago, and the difference between that $100 phone and the $800 phone is quickly closing.

The Moto G4 Plus sides on the side of performance, without compromising on price. The camera is a high point, and while it might miss a step here and there, it is one of the better cameras in this price range. Android 6.0.1 is nice and stock on the Moto G4 Plus, which is why we haven’t really spoken more about it — this phone is, for basically all intents and purposes, as stock as a Nexus device.

The design is… a touch plasticky, but it doesn’t look it. The budget price does not indicate budget construction here. The lack of NFC is regrettable, and the fingerprint sensor placed in the location of the home key, without that functionality, is frustrating. These three elements are, essentially, the only real gripes with the phone.

Lenovo taking over Motorola has given us a great phone this year in the G4 Plus, and some real inroads into the Australian market with an online store in the wings. We’re really excited to see what Motorola comes up with next, and the Moto G4 Plus is a big part of that.

Hmmm… Isn’t the F-stop number (2.0 and 2.2) about the actual width of the aperture and not its “speed”? If I’m reviewing cameras, I ought to know basics…

It’s a good thing I do know what I’m talking about then when it comes to reviewing cameras.

So we can also cite Wikipedia when its needed, great. Sorry I but the text really did gave the impression of somehow faster closure of the aperture and not the shutter speed

yes, your correct. Citing the aperture to be fast is strange.

Only for people who don’t talk about lenses much. Sheesh.

Hey Chris, great review there. Just wondering if and when the 32GB version may be available as it only seems to be the 16GB version available atm. Ps Moto Z looks dope so far from the unboxings.

Moto G4 Plus 32GB is indeed available in Australia, though you likely won’t find it at retail. You can buy it online direct from Motorola though (which hasn’t quite launched yet.. check in a day or two).

I would not get LG G4 , had 3 stuck on boot loops a well known problem