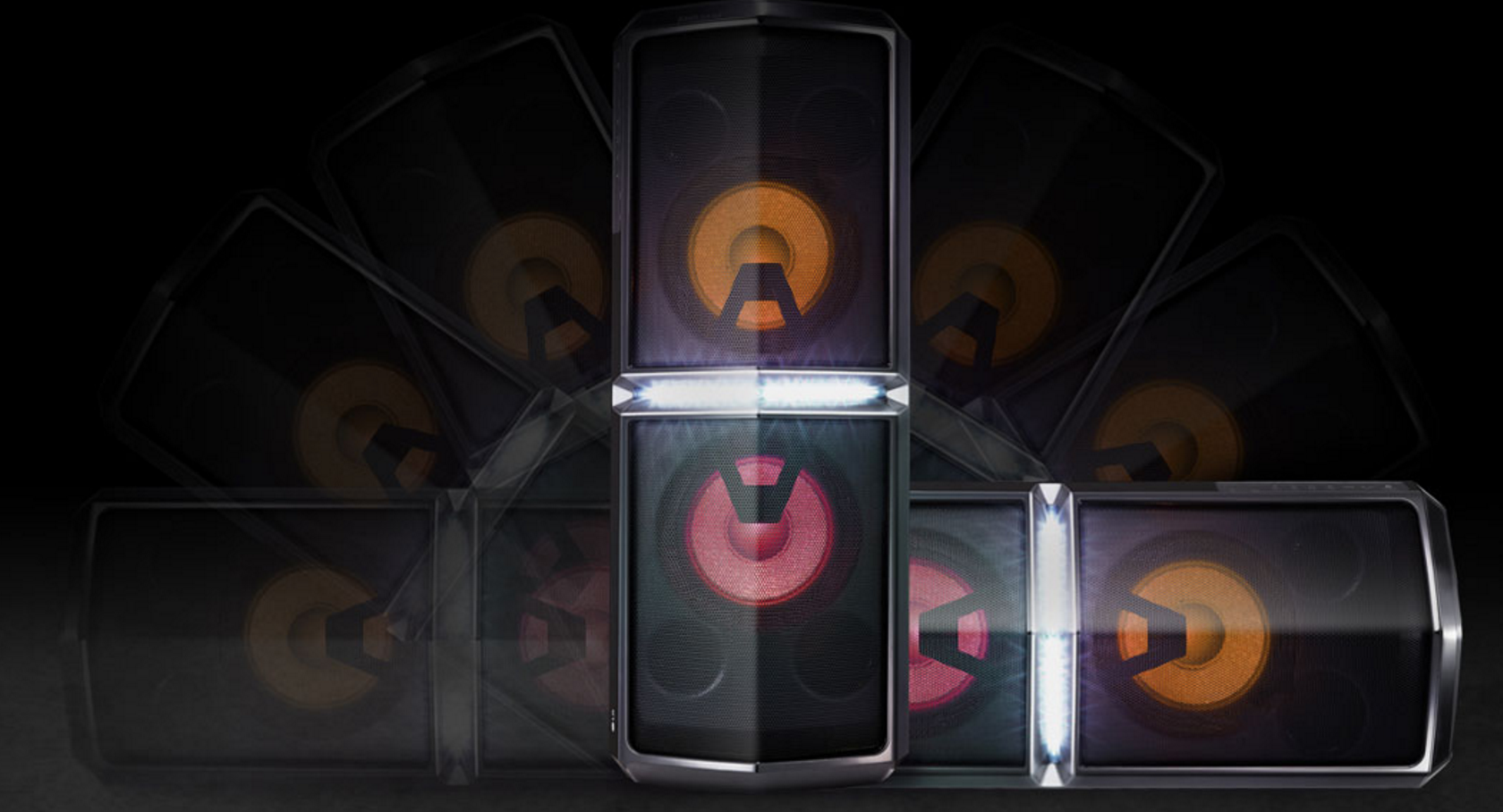 I listen to a lot of music, often topping 50 hours a week of listening time so for me purchasing good equipment (without being frivolous) is not a luxury it’s a necessity. I had the opportunity to review the Sonos Play:5 and I’ve got a number of the LG Music Flow speakers which I purchased after being really impressed with the review units and am really happy with them so getting an early look at the brand new Freestyler speaker from LG was a no brainer.

When it arrived and I struggled to fit it in my car, I was a really surprised at how bulky it was. I soon discovered that much of that bulk was packaging and the speaker was (while not competing with the H3 music flow) not outlandish in its footprint when sitting upright but it really imposes itself on floor space when it’s lying down. That was the time I started really thinking about the application of the Freestyler because while it’s capable of being a streaming (via Bluetooth) speaker in your home, that’s not the intent that it has been designed for.

The Freestyler is a party speaker first and foremost, only requiring a single powerpoint and one of a few options to get the party pumping:

When you take a close look at the hardware, there is little to fault LG on here. The speaker is really well built, solid construction with a hefty feel to it (it weighs near 17 kilograms) and is really well balanced. Even when it’s standing upright, it would take a full grown drunk to fall sideways into it to knock it over.

The speaker cones are well protected behind a solid mesh cage that is not only physically solid but quite nice looking and allows the lighting to project well from all angles. The other hardware facet that has really impressed me with the Freestyler is the fact that the switches, buttons and dials are all really well put together. There is a solid feel, almost mechanical clunk to them and there is not unexpected movement at all.

The sound out of the Freestyler is really impressive offering really full sound. It is tuned to fill a room rather than be the sole sound device in a room such as a sound bar, this is particularly evident when you closely listen and realise that the vocal and bass lines are really full, but the high range sound at times falling a bit short of balancing well – particularly at low volume.

When you do turn it up though, it does become clear that there is a party animal within that wants to get out. My earlier comment about the speaker being tuned to fill a room and project comes in here, the sound is excellent across the yard with some serious beats pumping or some rock for the air guitar sessions and it’s actually quite strange, but the sound quality and balance gets better as you turn the volume up and (not recommended indoors) when you really do crank it up the power really does show and the sound projects so well for a family BBQ, party or if you’re lucky enough to have a man cave this could be an awesome addition to your arsenal.

It’s really important to emphasise that this isn’t what would be recognised as a traditional home speaker system. It can be connected to through traditional methods such as RCA (from a CD player or other standard source) but it comes into a class of its own when you get it going in party mode.

Regardless of the playback source which is easily chose via the source button, it is simple to control via your phone/tablet on bluetooth or use controls on the actual speaker in a simple, clear and intuitive way.

Setup for a BBQ, in a hall or just for friends to come around and enjoy some tunes the Freestyler has a few party tricks that will certainly capture the attention and enhance the vibe. Let’s start from the visuals you can create with the array of built in lighting effects

While the lighting will run without any music playing it does react and come into time with music as well, all of this is a great start to creating the vibe you’re looking for. When you couple that with an almost (no Google Cast/Network streaming) complete range of input options including USB, FM Radio (make sure you plug in the antenna!), RCA input (could be used to plug in a Chromecast Audio) and the option of Bluetooth streaming, there’s no reason not to have the tunes you desire cranking when you’ve got friends around.

There are a couple of novelty functions that need to be explored on the Freestyler. There’s “DJ” and Karaoke as built in functions. If you’re a wanna be DJ then it’s far more important that you learn to use proper equipment, control scratchings and fadings to create audio effects than use the wheel and sound effect buttons on the top of the freestyler which plays sound over whatever you’re listening to (not backtrack or pause your playback) is a bit of fun but little more than a gimmick. The Karaoke on the other hand is actually not bad, it’s not a Karaoke machine but the functionality is fairly impressive. Once engaged the speaker actually mutes the vocal tracks on your playback (NB this didn’t work on ALL playback and I haven’t figured out why it didn’t on some) so that you and your friends can provide your own cracking vocals for the party.

One of the questions I have been asked when considering streaming audio equipment regularly is about the value for money that the product offers. You can spend $300 on the base level Sonos through to $750 on the Play:5 and similar prices on the Samsung equivalent speakers. So price wise the Freestyler lands fairly in the mid range of prices, but on the top end of functions.

So while its far from the cheapest option out there, the versatility that the Freestyler has over some of the other options on the market coupled with the outright power (600 watts) that it pushes out the value for money proposition is great.

There is a fair amount to like about the Freestyler including the looks, sound flexibility and range of sources that can be used on it. The only real drawbacks are the lack of Google Cast which can easily be overcome by adding a Chromecast Audio to your setups and the floor space that’s required to house it.

But what is ultimately important about the LG X-Boom Freestyler is the broad range of functionality from a TV Speaker, Streaming, FM Radio or USB input and it can be used to do some home style Karaoke it really can be the life of the party and I’ve really had a ball reviewing it, my kids are missing it a lot.

For anyone looking to invest, it’s not the cheapest option out there but it is far from the dearest too. At $599RRP and available through Harvey Norman, The Good Guys and Radio Rentals it shouldn’t be hard to find one on display if you want to check one out in person before buying and I’ve found the floor staff at all stored are quite happy to let you have a play.

If you’ve got the space to house one, I’d happily recommend the LG X-Boom Freestyler to anyone looking for something new, a bit different and capable of really cranking out some tunes.