When Lenovo launched the Moto Z at Lenovo Techworld in San Francisco in July the company hinted at a camera module coming soon. The camera module has been leaked in a promo image with specs and it looks like camera company Hasselblad will be onboard.

Hasselblad is a well known camera maker based in Sweden who have been producing high quality medium format cameras since World War 2. The Moto Z camera module, called the True Zoom will feature a 10x Optical Zoom with a manual shutter and zoom control, an option for RAW format capture and Xenon flash. 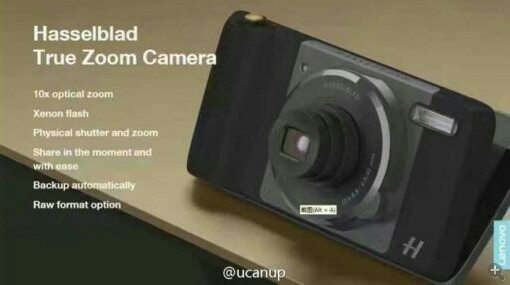 The module will attach to the rear of the Moto Z like other Moto Mods, using a magnetic attachement system that is surprisingly sturdy, yet easy to remove when you want. The modules and phone communicate through a proprietary 16-pin connector on the rear of the phone, sending data straight to the phone, which can then automatically be backed up to the cloud.

Interesting. If the camera software is good I’d give it a go. I already like Moto’s minimal bloat approach to the OS software.

That sounds a great idea and would be good for me as I go to a lot of cricket and phone photos from the boundary are too far away. I’d be very interested in this phone if it wasn’t for the measly 2600 mAh battery ?

I’d be pretty confident any sort of dedicated camera mod would include a battery boost as well.