For those who commonly use files from Google Drive when offline you probably have run into issues of version control. In the past when you manually uploaded a file to Drive it would create a duplicate of that file. This can become difficult to manage, and also makes it difficult to find the current version of the files you’re looking for.

Thanks to an update today some of those issues will be a thing of the past. Following the update when you manually upload a ‘duplicate file’ it will now replace the old file. Don’t worry, though, the old file will still be accessible via a right click (or a long touch we guess) letting you access the documents revision history. 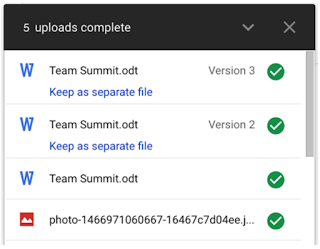 If you don’t want the files to enter the same ‘revision history’ you can either select “Keep as separate file” after uploading it or at any time from the version control menu.

For those working on non-Google apps files in Drive this could be a massive improvement. We’re not sure if the version system will be available for files automatically synced to Google Drive, (eg file you edit from within Drive rather than uploading) , nor will it help with merging multiple copies that have been edited concurentt, you’ll have to use Google Apps for that.

The update is rolling our from today and should be completed over the next 2 weeks.

What features would you like to see added to Google Drive? Let us know below.