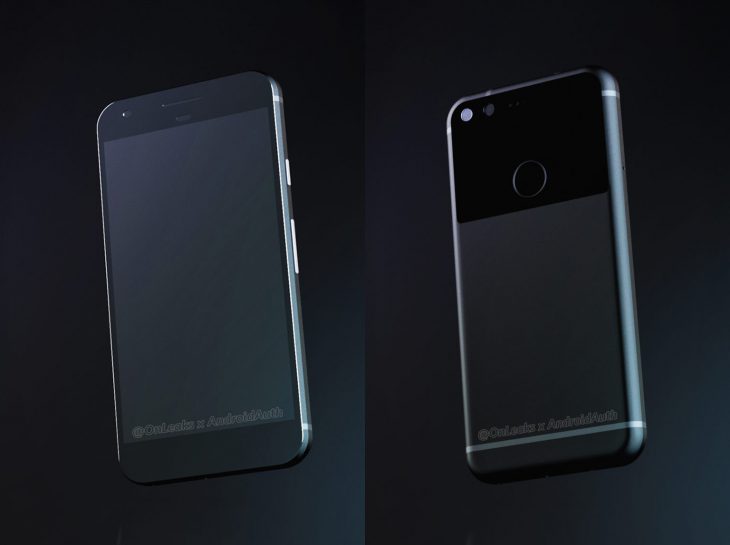 As happens every year, the closer we get to Nexus announcement time the leakier the Nexus and Google boat becomes. One might even go as far as to suspect that these leaks may in fact be a deliberate ploy to whet our pure Google Android appetite. This year, with Google apparently renaming the Nexus phones as Pixel phones, is no different.

This year we have already seen rumoured specs and a render appear (along with many other minor details). Now with the new Pixel phones from Google set to be announced very soon (on October 4 and on sale on October 20) some major leaks have appeared. Android Authority have gotten their hands on some very official looking renders and a 360 degree video of the HTC-made Pixel Sailfish:

As seen in the video the Google Pixel, dubbed the Sailfish, will continue what Google started last year with the Nexus phones and continue to support USB Type-C and will have speakers situated either side of the USB port on the bottom of the device, as we reported a few months ago. Android Authority were also able to confirm that the phone’s dimensions are 143.8 mm x 69.5 mm x 7.3 mm at the bottom while it is thickest at the top at 8.5 mm. There IS also a headphone jack along the top edge of the device unlike some other recently announced phones.

With Sailfish Pixel phone rumoured to arrive with a 5″ 1080p display, 4GB RAM, and up to 32GB of storage it promises to be a great mid range phone. I for one know what my next phone will be. Anyone else like the look of this?

Looks pretty sweet to me.

I’ve got a feeling it’s not gonna happen. Fingers crossed though. Water resistance is a great feature.

If they enable the system UI Tuner by default I will definitely consider it. I’ve always wanted a stock Android phone but the Navbar holds me back. I really want to be able to customize the Navbar (without rooting) so the back button is on the right, closer to my thumb. I know I’m pathetic but it’s all about daily convenience..

what is HTC like for repairs ? HUAWEI (n6p) was a joke, I destroyed the screen and basically chucked the phone in the bin, repair costs were 90% of the phone cost. Have since had a note7, i need a phone asap, don’t know if I can wait until the end of october.

This is still the main reason why I reluctantly chuck a screen protector and case on my phone. I hate them, but what I had more is a broken or damaged phone after owning it for a month.

This is the first Nexus since the N5 to really pique my interest. Now Google seem to have better camera hardware its very tempting. My only concerns are battery life and price.

I suspect at the $700-800 price it’ll come in at it won’t tempt me away from my z3 compact no matter how good the battery life. Once there’s a good sale though things may be different.

If it gets thicker to remove the camera bump I am more than happy to take it. Camera bumps look awful. Give me a flush phone with more internals.

The half glass back looks odd, but unlikely to really matter once a case goes on it. Hopefully the size of it means there’s Qi charging too (although it is very off centre which would make positioning the charger hard).

Otherwise, bland and inoffensive – they just need to makes sure it’s not overpriced (again).

Are they saying it gets gradually thicker towards the top or is there a hump of some size?

How about Marlin? I am totally confused.

I buy every Nexus phone, but that ends here. This looks ing disgusting from a design perspective. How can you go from a premium Nexus 6P to this garbage? It literally looks like an old iPhone 4/4S but with rounded edges.

Safe to say, if my Nexus 6P breaks, I’ll be buying another one to replace it – not this.

Sailfish is not the Pixel XL. That would be Marlin.