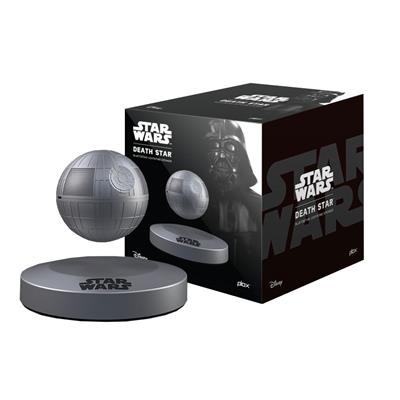 From Australian manufacturer Plox comes this officially licensed Star Wars Death Star Levitating Bluetooth Speaker – a sure fire way to spice up your desk and listen to some tunes while you work.

The speaker features a single 5W speaker so it’s not super powerful, but will give you enough power to listen to music or podcasts at your desk without annoying your cube mates. The speaker is battery powered with 5 hours of playback so you can take the speaker with you anywhere and it’s charged wirelessly from the included base.

With Rogue One due in cinemas later this year, in a movie which will revisit the building of the Death Star that appeared in the original trilogy, any merchandise featuring the moon (that’s no moon) sized battle station is sure to be cool and a levitating bluetooth Death Star shaped speaker is simply awesome.

As an officially licensed product, you’ll also find an identifying NFC chip embedded in the base. The chip contains information about the device authenticates it as an original product. You can also scan it to gain access to brand new information on the Star Wars website.

At $249 you’re paying a bit of a premium for the Star War theme, but I`ll say it again ‘It’s a Star Wars Death Star Levitating Bluetooth Speaker’. It’s arriving at JB Hi-fi stores on the 1st of October and you can pre-order on their website or head to the Plox website at getplox.com.

had to do it

This look freaking awesome!! 🙂 Not a lot of info out there about it though… all the videos etc are for the Hellosy version – which actually kind of ‘looks’ (don’t know about sound) better.