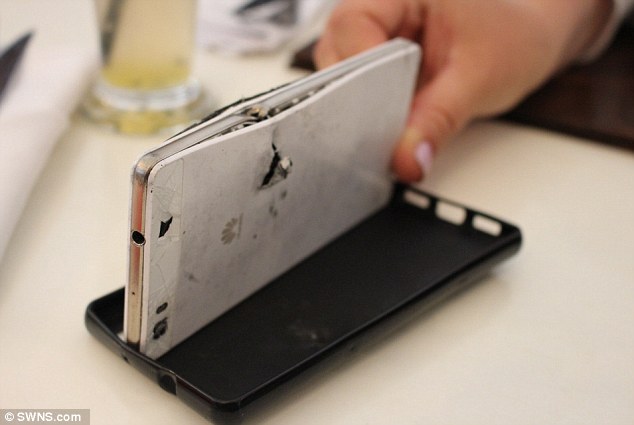 Whenever we see phones with holes in them recently we expect the worst and think that it’s just another phone that has exploded. Today a Huawei phone did not endanger a life but instead saved one.

A month ago a man in South Africa was attacked by robbers who fired upon him. After awakening from passing out he realised that his phone, a Huawei P8 Lite, had taken a bullet for him. There was a hole in his jacket and a small mark on his chest but the phone had taken the brunt of the bullet’s impact. The phone itself is obviously destroyed but I’m sure the owner is less concerned about that than the fact not a drop of his blood was spilled. The robbers made off with $20 but left the phone behind.

Upon hearing of this Huawei have replaced the P8 Lite with a P9 Lite and have treated the man and his family to a lunch along with VIP entry to ALL home matches of the local soccer team which is sponsored by Huawei.

Here at Ausdroid we have long been fans of the build quality of Huawei phones and we expect, and hope, that Huawei will use this as a marketing tool to espouse the quality of the materials they use.

We have reached out to Huawei regarding adding “bulletproof” to their phone’s specs. Anyone considering getting a Huawei phone before heading to any war-torn countries? Might seem prudent.

This is crazy. Huawei’s kindness of replacing it and treating him is top notch. Love it.