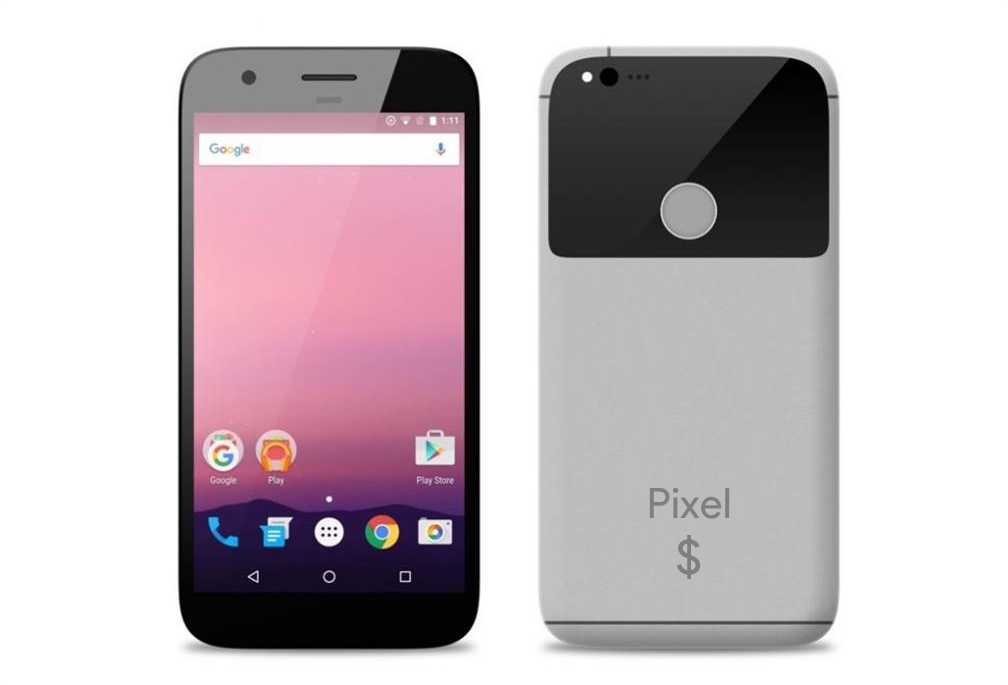 We’re almost 2 weeks away from the rumoured Google Hardware event where we’re expecting Google to announce the Pixel and Pixel XL phones, along with a whole host of other great hardware. If you were hoping to pick up a Pixel or Pixel XL for less than flagship prices you might be in for a disappointment, with the smaller device rumoured to be priced at around $649 USD, which is about $860 AUD before any local costs and taxes.

We think it’s safe to assume that if the $649 USD price that Android Police has uncovered is indicative of pricing here, we won’t see the smaller Pixel phone in Australia for much less than $899 AUD. That price will be for the smaller storage variant, which will hopefully be at least 32 GB. The Pixel XL could easily sell for $999 or more depending on storage options.

Those prices are estimates based on rumoured US pricing, so you know find some salt, but we expect them to come in near those prices. This leaves little doubt that the Pixel and Pixel XL are going to be marketed as premium devices. Whilst they aren’t quite at the Note 7 pricing level of above $1300 they are definitely at the top of the pricing pack. Let’s hope the hardware, especially the camera, and software experience match those prices.

The Pixel pricing isn’t all that has leaked out, the pricing for Google’s new Daydream View VR headset has also been hinted to be around $80 USD, or about $110 AUD, before local costs. It’s unclear if that price includes the Daydream controller as well or if that is a separate purchase.

All and all if you’re wanting to get the biggest and best of what Google has to offer this year then we’d expect you’ll need to put aside over $1100 AUD, and that’s just for the Pixel XL and Daydream View, if you want the rumoured Google Android Wear watch, 7″ Tablet, 4K Chromecast/s and Google Home you might as well start saying ‘good buy’ to at least $2000 – $3000 AUD.

If you’ll excuse me I’m off to clean the house, make my wife’s lunch and wash her car, I may need some good will in the near future.

Let us know which Google devices you’re wanting and how much you’ll think they’ll cost.

I have to say I’m thinking very carefully about the Nexus/Pixel/Google phones this year. We’ve just had this same conversation internally, but for me it will be the cameras and battery life that make the difference. My two preferred phones this year are the Note 7 and S7 Edge, and both have excellent battery life and great cameras. If the Nexus/Pixel/Google phones can’t best them (or at least equal them) in battery life and camera, then I’m out, because those are my key factors. VoLTE support on local carriers would also be important, but I’m fairly sure we probably won’t… Read more »

I’m not against a $1000 Pixel phone, but if they want me to fork out that sort of money for the phone, I’m going to expect a top of the line feature-set, namely an excellent camera and battery.

If the Pixel XL can’t come to the table with a stellar camera and battery, then I’ll be looking elsewhere. Every Nexus phone since the Nexus 4 has been an instant buy for me, but I’m really skeptical about this one.

Definitely will be passing on these. But then I see no benefit to buying any android device over US 399.

And in this case, what appears to be little more than a rebranded HTC phone, I have even less interest. At least prior Pixel devices actually were pretty well designed from the ground up by Google.

Makes me wonder what I will do once my 5x no longer gets updates.

A re-branded HTC? And last year’s Nexus 6P was not just a re-branded Huawei? HTC may have built the phones but who is to say that Google did not have an input into its design? For me, the killer will be the price.

Well to me Nexus and Pixel are not the same in terms of branding. And certainly if they are charging premium prices they need to offer something more than what they appear to be. Not even sure it has the Pixel lightbar.

Mate. You won’t get any argument from me on that point.

Given previous Nexus have had terrible camera’s compared to the Samsungs, then i’ll skip the Nexus (Pixels) this year and wait for the Galaxy S8.
Buying from Google will also cost you import duties – and there’s no way i’m buying a carrier branded Pixel – what’s the point of quick software updates if they just hold them up).

A new tablet and watch from Google though? Sign me up. You’ve got the Gear S3 to compete with there, so as long as the same features are available, i’ll buy from Google.

Camera on the 6P and 5X is excellent. The 5X is borked because it takes too long to bloody load, but the 6P takes excellent shots.

The brief experience I had with the Nexus 6P (only 2 weeks) the camera was average, and nothing compared to my S7 I replaced it with. Maybe the software has improved since then.
I really hope these devices impress.

I was more addressing the fact you think they were terrible. Not a valid assessment of the cameras. They aren’t on par with the Samsung’s but by no means deserving of the description ‘Terrible’.

Ultimately I’m just hoping the pixels will be Samsung quality.

I think youll get close to the $1000 mark when you take GST off that.

Also remember that Google dont include GST although the price is in AUD so if its over 1k you may get stung as you bring it in like a lot of 6p users did last year.

Considering grey imported S7’s are popping up on ozbargain for the $600 mark and local stock im sure ive seen them in the $800 range its hard to justify this device.

Some fair points, though your iphone analogy isn’t helped by Apple maintaining last years prices for this year in both the US and here… and the exchange rates use last year resulted in more “Apple Tax” this year.
but agree the estimate is a bit low … think GST was missed… $950 likely starting point.

If XL’s camera can be as good as iPhone 7 plus, it’s worth me to prepare $1100 AU to buy one. Let’s wait and see. So far iPhone’s camera is always better than Nexus’s even 6p.

I’ll be thinking about it if the camera is phenomenal. Otherwise the LG V20 will be my upgrade of choice this year.

It seems like the days of cheap Nexus hardware have come to an end which is a real shame.

The Nexus 5X (which I bought for my wife for around AUD300) is a brilliant phone for the price – I would love Google to have an ongoing deal with LG to produce cut-price AOSP devices and make having up to date software affordable for the masses.

Makes the current sell out price of the 5X an utter bargain. And they will update to Nougat straight out of the box. Just make sure you get H791 variant to get proper Oz frequencies. As little as $349 from Kogan and others.

This year is a watch year for me. Might get interested in a New 7 inch tablet to replace my Nexus 7 too. Oh, and it goes without saying that the Google Home will be in my Home as soon as possible too! Been saving birthday (May) and Fathers Day presents for #NerdChristmas

Totally ludicrous and over the top pricing. No way I’m paying $900 for a 5″ phone without a microSD slot and wireless charging.

For HALF that price I can pick up an LG G5, which at least comes with microsd and dual cameras. Nothing about this is making me think the pixel phones will be any more ‘premium’ than that.

My only fear is google will attempt to create a two tier OS with the best bits reserved for their overpriced efforts. If they do then that will kill the entire Android market stone dead.

Anyone know if LG G5 will get Android Oreo aka Android 8 ?

of course it will. the better question is “when will it get Android O?”

I dare say a very large percentage of the Android users around the world wouldn’t even know that Nexus (or Pixel) is a thing.

Your pricing observations are true though – I buy my phones outright and I’ll never, ever spend that kind of money on a handset when I can get a Samsung or LG device that’s a few months old for half the price.

If they try for a two tier OS, they are putting all the other manufacturers at a disadvantage relative to googlephones. Samsung have already talked about making Tizen phones in addition to their watches, and the chinese manufacturers aren’t keen on google’s control anyway. Things would tend to splinter apart with forking and new approaches – cutting the overall 80% Android market share down pretty quickly.

And let’s face it, the hardware on the pixel phones doesn’t look to justify such a massive price hike, so we can only assume software exclusives.

What can Google really do in software that Samsung et al wouldn’t be able to easily mimic and integrate? Either way, the market share that these Pixel devices gain v what Samsung has is pretty unlikely to have Samsung rage-quitting and moving all their Galaxy’s to Tizen. We’ve heard this fear-mongering for years and I’m yet to be convinced Tizen is a viable alternative.

And all lose access to the millions of apps/entertainment on the play store? You’d be at a huge disadvantage going that way and it would take years to build up your own app store, if you even could.

Yeah might move to something else, if this is the case Google has jumped the shark and it is time to move on.

Why’s that? If the device hardware is as good as others in the game, why should Google feel compelled to subsidise a cheaper price?

Still, you can move to another OEM and hope like hey they roll out updates with any sort of vaguely timely schedule. I’d rather pay more than previously for a Google phone and be safe in the knowledge I’m getting the best of Android, and as soon as possible.

Probably settled on a higher price early on and then wanted to find a way to get around the Nexus fans’ inevitable “but Nexus phones are supposed to be affordable” comments; ta-dahhh, name it after the premium tablet! Problem solvered? 😛

There were numerous complains that the 2015 nexus handsets weren’t premium enough.

The 2015 phones weren’t cheap. They price might have dropped now, but $600+ for the 5X was an heavy chunk of change for a successor to the N5. If you ask serious money, you ought to get your money’s worth.

Yes, 5x is a big disappointment for me.